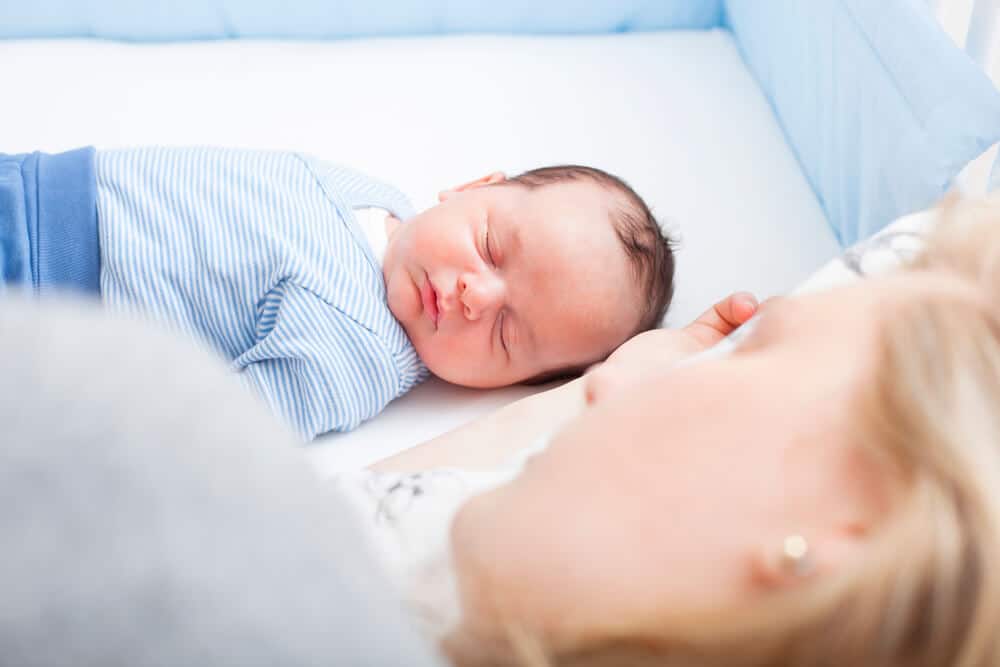 Is a cosleeper attached to your bed safe for your baby—or are there better options?

When it comes to selecting a safe sleep space for your precious baby, you can’t be too careful.

“Your baby usually will be unattended when in his or her crib, so this should be a totally safe environment,” says the AAP.

The tricky part, unfortunately, is knowing exactly how to do this.

The number of products marketed for infant sleep are seemingly infinite. It’s a challenge to know which ones are actually known to be safe versus claimed to be safe.

In this post we’re going to take a look at a class of infant beds, the bedside sleeper — AKA a cosleeper that attaches to your bed.

Be sure to read the conclusion for my final verdict!

Here are the questions we’re going to answer… 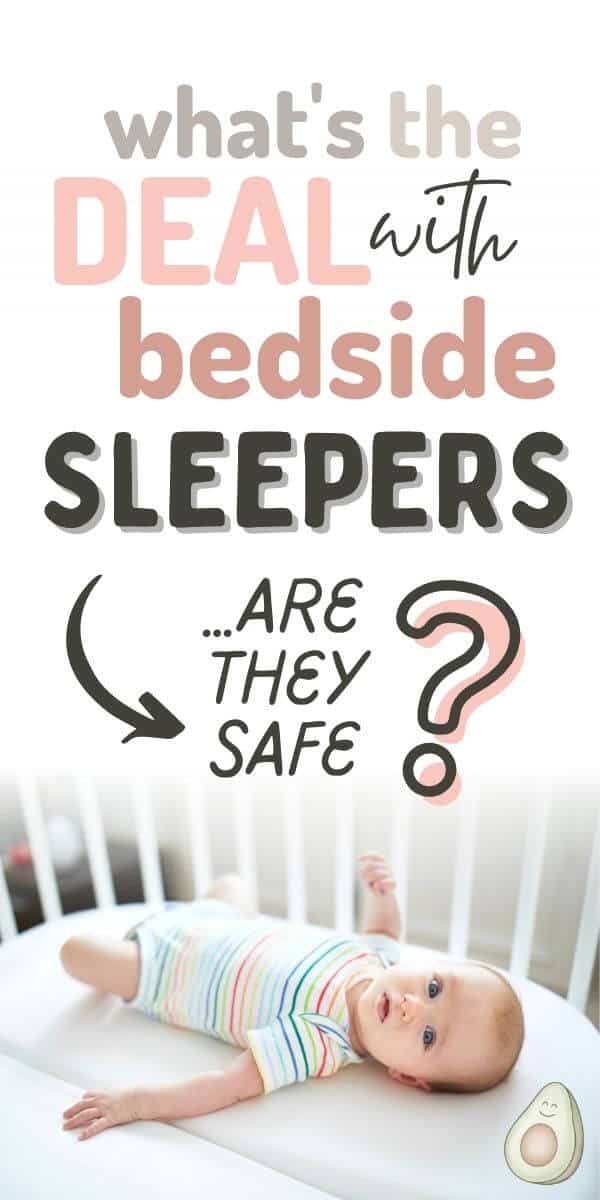 What is a cosleeper that attaches to a bed?

An attachable cosleeper, often called a “bedside sleeper” or a “sidecar,” is an infant bed that only has 3 sides (or a very short fourth side). The fourth side is intended by the manufacturer to be placed up against or attached to the caregiver’s bed.

Related: How Long Can Baby Sleep in a Bassinet?

Why do parents like the concept of a cosleeper that can attach to their bed?

Babies are notorious for not liking to sleep in their own beds; it’s kind of what they do.

Cosleepers are seen as a ‘middle ground’ between sleeping in the parent’s bed (bedsharing) and sleeping in a bassinet. Breastfeeding moms like the convenience of having baby close by.

This doesn’t mean it’s safe. We’ll get to that momentarily.

Is a bedside cosleeper the same thing as a bassinet?

No. Both are marketed for infant sleep, but only bassinets are recommended by the AAP.*

Bassinets have 4 sides of equal height. Bedside sleepers only have 3 full-height sides. The fourth side is intended to be attached to an adult bed.

Most bedside sleepers (i.e. cosleeper attached to bed) can be converted into a bassinet by raising the lowered side to create four equal-height sides.

*The two recommended alternatives to a bassinet are a crib and playard.

Is a cosleeper attached to a bed safe?

“There isn’t enough research on bedside or in-bed sleepers,” says the AAP.

“The AAP can’t recommend for or against these products because there have been no studies that have looked at their effect on SIDS or if they increase the risk of injury and death from suffocation.”

Why wouldn’t a cosleeper bed attachment be safe? 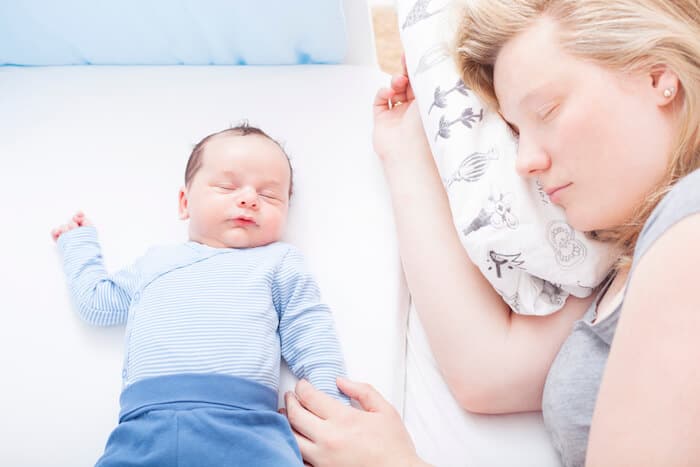 However, the lack of a 4th wall creates a host of opportunities for user error. So many things can go wrong, especially when new parents are utterly exhausted, as most are.

Let’s take a look at a few warnings in the ArmsReach Co-Sleeper user manual as an example:

FYI — you won’t see any of these warnings in bassinet manuals.

Now let’s look at this advisory, which I’m going to list separately for obvious reasons:

You read that right! Here it is, straight from the manual:

What are the safer alternatives to a bedside cosleeper that attaches to your bed?

Any product that is officially a “Bassinet” is a safer alternative to a baby co sleeper that attaches to a bed.

(Read the FAQs below for how to know if it’s actually a bassinet).

If you’re looking for a product that’s similar to a baby bed that attaches to your bed (in that it’s easy to pick up and put down your baby during the night), here are some wonderful options:

This mini playard that will last you until toddlerhood

This one is my personal favorite because it grows with your baby and will outlast any bassinet.

Related: Bassinet vs Pack N Play: The Ultimate Guide to Help you Decide

This one that hovers over your bed

This is a super popular bassinet because it can swivel to be close to you in bed, without actually being attached to your bed.

This one that will help your baby fall asleep

This is well-liked bassinet gives you lots of bang for your buck!

This basic one that gets the job done

This bassinet is not fancy, but it’s safe, and that’s all that matters! Plus, it’s not hideous either.

Conclusion: Should you use a cosleeper attached to your bed?

Using a co-sleeper instead of a bassinet is choosing the less safe option.

It’s like going bike riding wearing a construction hat instead of a helmet. Only the latter has been extensively crash tested.

If that analogy is too far-fetched, I’ll try another:

Sushi at your favorite restaurant versus sushi at a gas station.

See where I’m going with this?

Bassinets are well-studied and are known to be safe. They are proactively recommended by the AAP, the authority on infant health.

Cosleepers, on the other hand, are just a big question mark.

The choice should be crystal clear: There’s zero sense in taking a gamble on a vulnerable newborn’s safety, particularly since the safer option is only the slightest most negligible bit more ‘inconvenient’ than the less safe option.

Not to mention, the safer option can also be cheaper.

So, as long as the jury’s—the AAP’s—still out on whether bedside sleepers are as safe as bassinets, I’m going with NO, you should not use a cosleeper attached to your bed.

How can I be sure that my baby’s bed is a “bassinet” and not a “cosleeper”?

The only way to know for sure is to look at the user manual.

The product must explicitly be called a Bassinet in the user manual.

User manuals are legal documents, so you won’t find the same funny-business as you do in the sales descriptions online.

If you haven’t bought the product yet, Google the make and model + “user manual” and you’ll find what you’re looking for.

There are so many options of what to buy; how do I know which infant beds are the safest?

Thankfully, this is actually much more simple than you might think.

You can know whether a product has been rigorously tested and approved for infant sleep IF, and only if, it is called one of the 3 following terms in the user manual:

All of these are legal terms, not marketing terms, as long as you see them in the product’s user manual, not just the online description.

The below list is not exhaustive, but here are some types of product that are NOT held to the same safety standards:

Is the Arm’s Reach Co-Sleeper safe?

The Arm’s Reach Co-Sleeper is considered a “bassinet” when all 4 sides are up. Therefore, when used with all 4 sides, it is safe.

However, when used as a bedside cosleeper attached to a bed (i.e. with only 3 sides), it is no longer recommended by the AAP due to the safety risks we’ve discussed in this post.