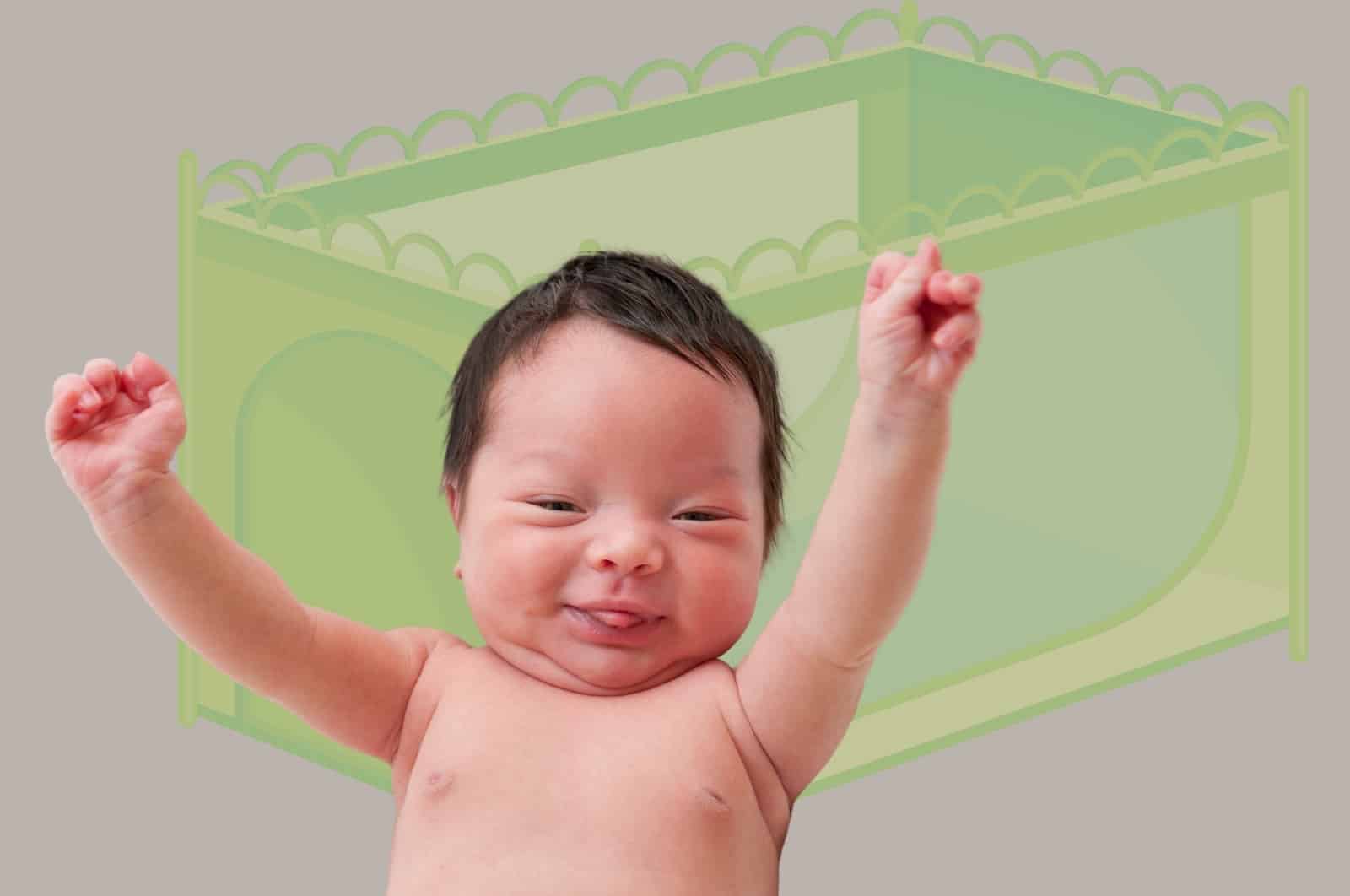 Is it safe for your new baby to sleep in a playard instead of a bassinet?

Whether you’re considering using a Pack N Play as your newborn’s primary bed or you’re wondering if a playard is a safe travel crib for a young baby, you’re in the right place.

This evidence-based guide will answer the important question as to whether newborns can safely sleep in Pack N Plays.

We’ll also talk about the safety of various Pack N Play features such as bassinet attachments, nappers, and bassinet levels.

Disclaimer: None of the information contained herein should serve as a substitute for reading your own user manual. 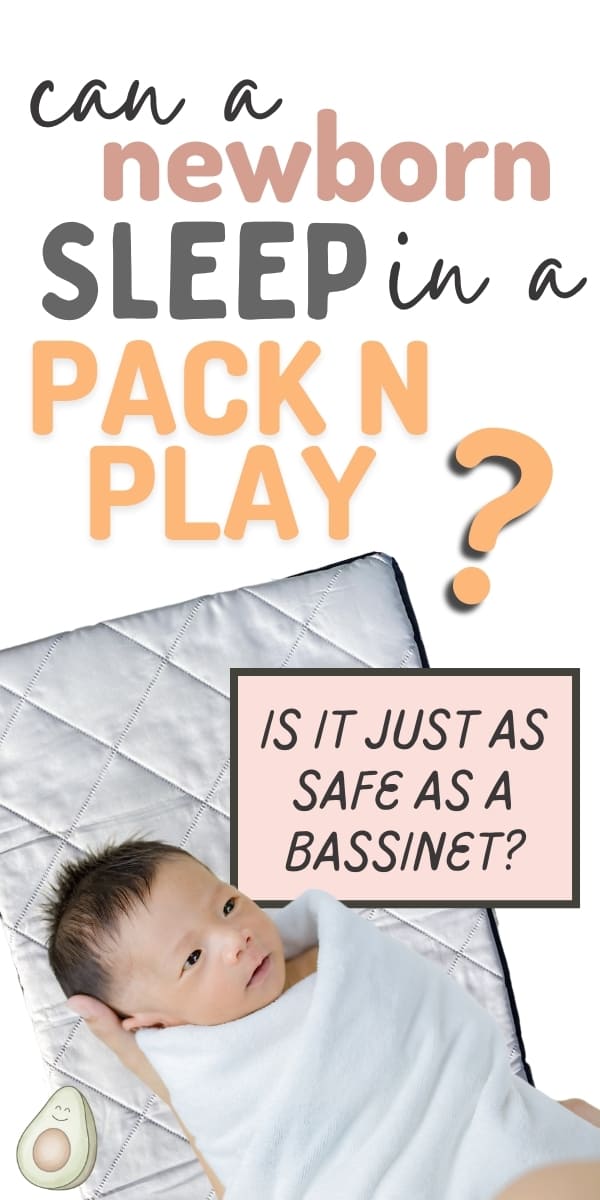 Can a newborn baby sleep in a Pack N Play?

Yes! Just like bassinets and cribs, playards are federally regulated for infant sleep.

It’s perfectly fine to use a Pack N Play instead of a crib or a bassinet.

A newborn can either sleep in the upper bassinet (that comes with certain models) or the lower part of the Pack N Play. Both are considered safe—but with 4 important caveats that we’ll get to shortly.

Which Pack N Play attachments are safe for infant sleep?

The only type of playard attachment that’s safe for sleep is a BASSINET.

Here’s an example of a Pack N Play that comes with a bassinet attachment (which is safe for sleep):

The bassinet is that circular thing on the left.

Now here’s an example of a Pack N Play attachment that is NOT safe for sleep:

The thing on the left is a “seat”.

As you can see, these 2 products look very very similar.

But there are important differences between the attachments:

Be careful: It’s not uncommon for companies to sneak the word “bassinet” into their sales descriptions when the product is not a true bassinet.

In order to be a true bassinet, it must meet CPSC safety standards.

The only way to know for sure whether the product is indeed a regulated bassinet is to check the user manual, which is a legal document. If the manual calls it a bassinet, you’re good to go.

TIP: If you’re still in the decision-making phase about which Pack N Play to buy, you can easily Google the user manual by searching [model name] + manual.

As surprising as this, the napper attachment on a Pack N Play is NOT safe for infant sleep.

Do not let your baby sleep in a “napper” even if you are supervising.

Thankfully, Graco has phased out the misleading name “napper” and replaced it with “seat”. But nappers are unfortunately still available for sale through distributors and resellers.

How can it be called a napper when it isn’t safe for naps?

…which will finally become illegal in 2022.

Nappers are too padded and too inclined to be safe for sleep. They are not subject to federal safety regulations.

Again: Bassinets are the only Pack N Play attachments that are safe for sleep.

Are bassinet levels on a Pack N Play safe for sleep?

A bassinet “insert” is the higher level of the Pack N Play, also called a bassinet level.

As you can see below, the pink mattress is towards the top of the Pack N Play. This is considered the bassinet.

Bassinet levels of a Pack N Play meet federal safety standards, and are therefore safe for a newborn to sleep.

Be sure to check your user manual, as most Pack N Play bassinets have a weight limit of 15 lbs and should no longer be used once the baby can push up on their hands and knees.

What determines whether a Pack N Play is safe for infant sleep?

While Pack N Plays are generally considered safe for newborns to sleep in, there are 4 important caveats to keep in mind:

Let’s break those down…

In order for a Pack N Play to be safe, it needs to have been manufactured after February 2013, which is when the latest safety standards were implemented.

If your playard was manufactured before then, it’s not safe to use.

If you just purchased a new Pack N Play and assembled it according to the user manual, you’re probably in good shape.

If you’ve already owned your Pack N Play for a bit — or you’re receiving one second-hand — there are several things to be aware of:

It’s important to read your user manual to see when any and all parts of your Pack N Play are no longer safe for use.

Keep in mind that there are different height and weight limits for each section of the playard.

How you use it

The third element of making sure that your Pack N Play is safe is creating the right sleep environment. Here are some important highlights:

A Pack N Play is only safe for sleep if it’s completely empty. No toys, cushions, DockATots, Snuggle Me loungers, blankets (under or over baby), lovies, or stuffed animals.

It’s never safe to add a supplemental mattress or anything at all to make a Pack N Play more comfortable.

If your playard has attachments such as a changer or napper, they need to be removed before sleep.

Always place your baby down on their back, even if you suspect they might roll over later.

If your baby is showing any signs of being able to roll over (or is already rolling), stop swaddling immediately.

Make sure that the Pack N Play is a minimum of 1 foot away from any objects, curtains, furniture, etc.

Dress your baby appropriately based on the temperature of the room to avoid overheating. Read more about how to keep your baby warm at night.

You can read all the evidence here.

FAQs about letting your newborn sleep in a Pack N Play

Is it safe for baby to sleep in Pack N Play every night?

Yes, absolutely. A Pack N Play is a perfectly safe alternative to a crib or a bassinet since it meets CPSC standards for infant sleep.

Be sure to review the 4 caveats that determine whether it’s safe for a baby to sleep in a Pack N Play.

Can babies sleep in playpens?

Babies can sleep in playpens as long as they meet CPSC standards for play yards.

Some of these qualifications include:

The simplest way to tell if your baby can safely sleep in a playpen is to take a look at your user manual, which is a legal document.

If the product is called a “play yard” in the manual, then it is required by law to have passed safety testing for infant sleep.

You should never “DIY” an infant bed by using a baby gate (or similar) with your own mattress.

It’s critical for your child’s safety to only use a play yard that has been tested in its entirety.

How much is a Graco Pack N Play?

If you’re specifically looking for a Graco brand Pack N Play, the price range is roughly between $50 and $300, depending on the bells and whistles.

Prices are subject to change.

How big is a Pack N Play?

There are all different models of Pack N Plays, each with different dimensions. (You can read the CPSC’s playard size standards here).

To give you a rough idea of the size of a Pack N Play, most models are approximately 40 inches long, 30 inches wide, and 30 inches tall, give or take a couple of inches.

There are also mini Pack N Plays that are, of course, much smaller.

Here are the dimensions of 2 popular models:

If you live in a small place, the great thing about a playard is that you can easily move it around or collapse it.

What else is a Pack N Play used for?

A Pack N Play can serve 2 purposes: It contains your baby or toddler during supervised activities and it can be used as a crib for sleep.

Here are 3 ideas for using a Pack N Play: