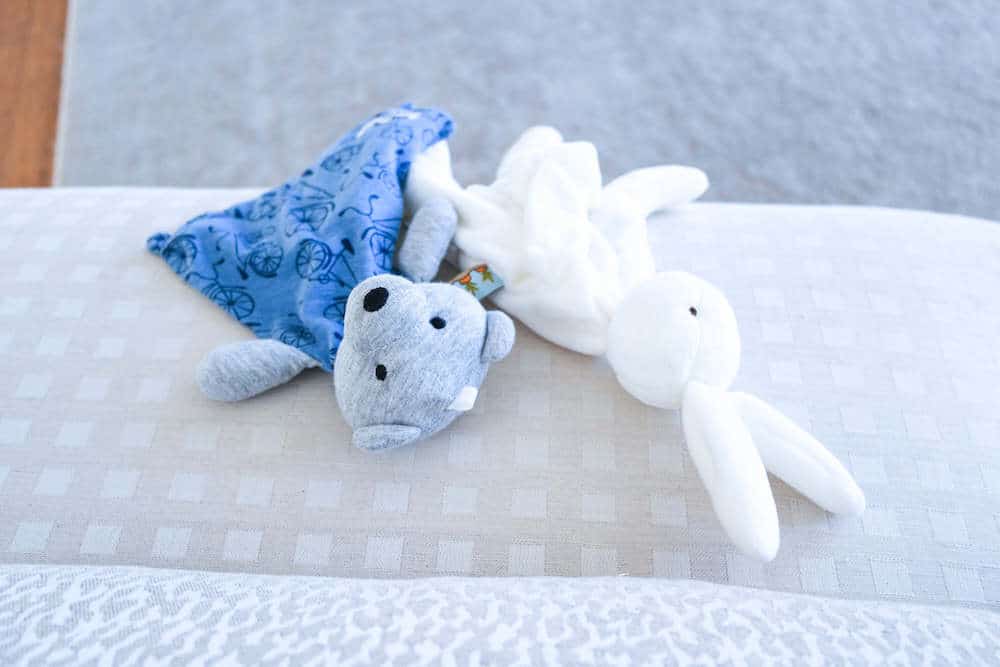 Keeping your baby safe while he sleeps does NOT fall into the “you do you, mama” category.

SIDS is the leading cause of death in healthy, full term infants.

And guess what? It’s almost entirely preventable, just by following the ABC’s of safe sleep.

Where (and with what) you allow your baby to sleep is a decision that should not be taken lightly.

Let’s see what the experts have to say about when your baby can sleep with a lovey.

Note: There’s a video in this post you need to see.

Don’t have time to read it all now? Email this to yourself for later! 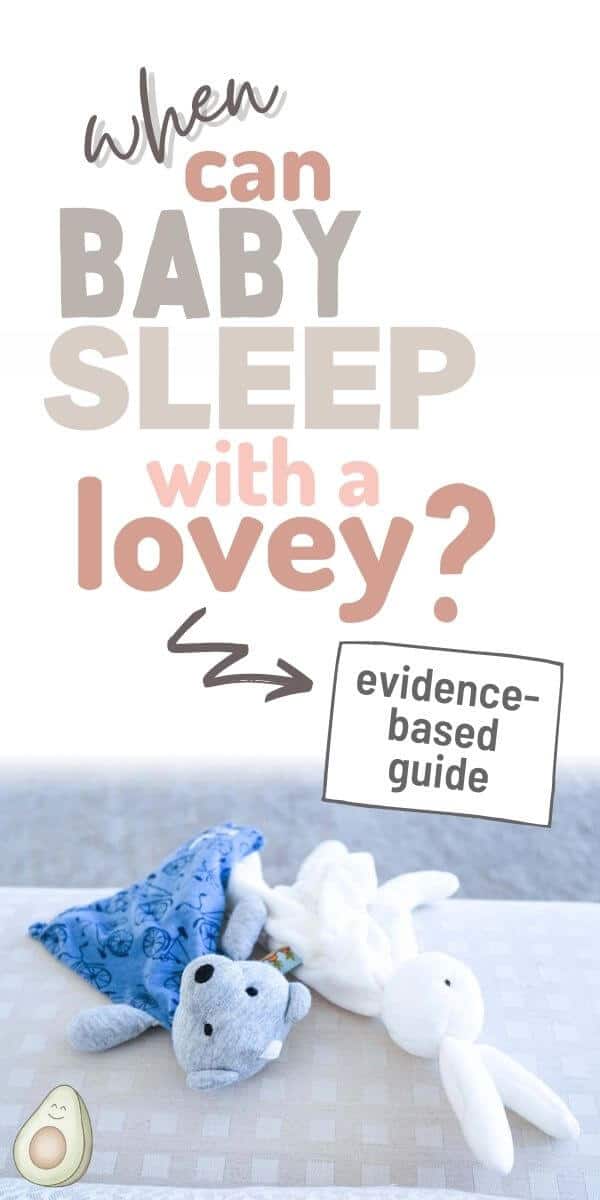 What is a lovey?

A lovey is a transitional object, similar to a security blanket, that’s a hybrid between a blanket and a stuffed animal. Most loveys for babies consist of an animal head attached to a small blanket.

When can your baby safely sleep with a lovey?

At a minimum, your child should be 12 months old before you allow him to sleep with a lovey.

The AAP‘s recommendation for infant sleep is simple:

“Nothing else should be in the crib except for the baby.”

They advise, “Keep soft objects, loose bedding, or any objects that could increase the risk of entrapment, suffocation, or strangulation out of the baby’s sleep area.”

It’s safest to wait until your child is sleeping in a toddler bed, which is a non-enclosed space. Toddler beds may be used starting at 15 months.

I’m going to show you an impactful video in just a moment. 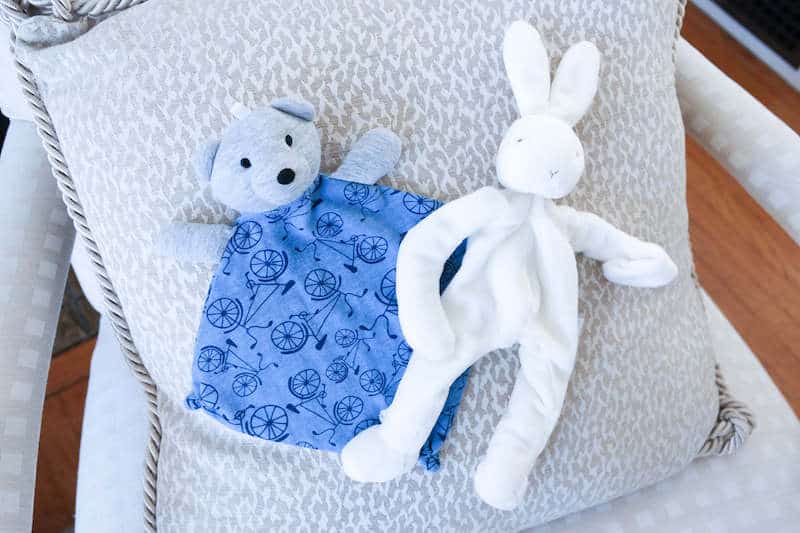 Is it safe to give your baby a lovey in his crib once he’s 12 months?

According to the AAP,

“Research has not shown us when it’s 100% safe to have these objects in the crib; however, most experts agree that these objects pose little risk to healthy babies after 12 months of age.”

That said, letting your baby sleep with a lovey depends on the make and model of your crib. Most crib manuals explicitly state that soft bedding should not be added to the sleep space.

This is why it’s safest to wait until your child is 15 months and sleeping in a toddler bed.

PIN THIS GRAPIC (and keep reading for an explanation!)

Loveys are a suffocation risk for babies.

“A large percentage of infants who die of SIDS are found with their head covered by bedding,” says the AAP.

The CPSC reports, “the presence of extra bedding such as pillows, blankets, and/or comforters, among others” is responsible for the vast majority of crib deaths.

A video is worth (more than) a thousand words

This video drives home the reasoning behind the aforementioned AAP guidelines.

Click the image. The video will open in a new tab.

Then come back and read about why sleep consultants have told you loveys are safe for sleep. 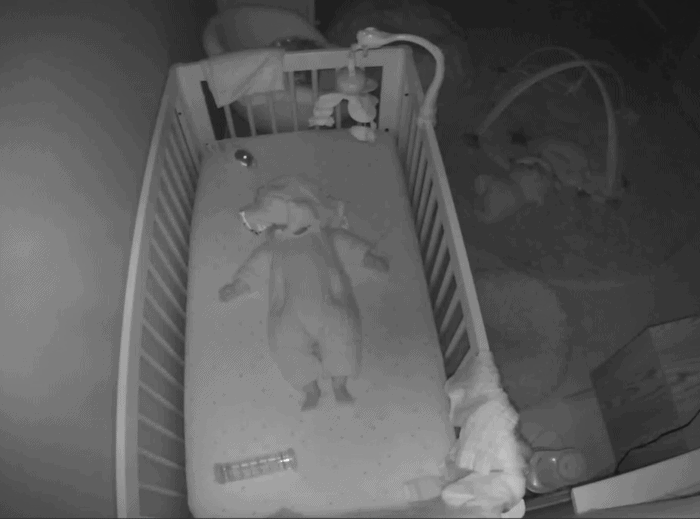 This baby boy is lucky to be alive and well today because his mother got to him in time.

What about all the “experts” who tell you to give your baby a lovey to sleep with?

Opinions are pretty useless (and potentially harmful) when they aren’t backed by scientific research.

(b) been studied or tested and shown to increase the risk of SIDS; or

It’s that SIDS is a particularly tricky phenomenon to understand—even for scientists, statisticians, and medical professionals who have devoted their careers to understanding its mechanisms.

You see, SIDS risk factors aren’t nearly as obvious as most other matters of infant health and safety.

We didn’t even know one of the most fundamental risk factors for SIDS, stomach sleeping, until very recently (1994).

With SIDS, we are talking about risk factors that only appear by looking at large numbers of people in an unbiased way.

Any single individual’s experience—even a pediatrician’s—is not generalizable to risk levels at the population level.

So, while it’s tempting to listen to any tips that will help your baby sleep (we’ve ALL been there), it’s essential to bear in mind that ignoring AAP guidelines is increasing your baby’s risk of SIDS. 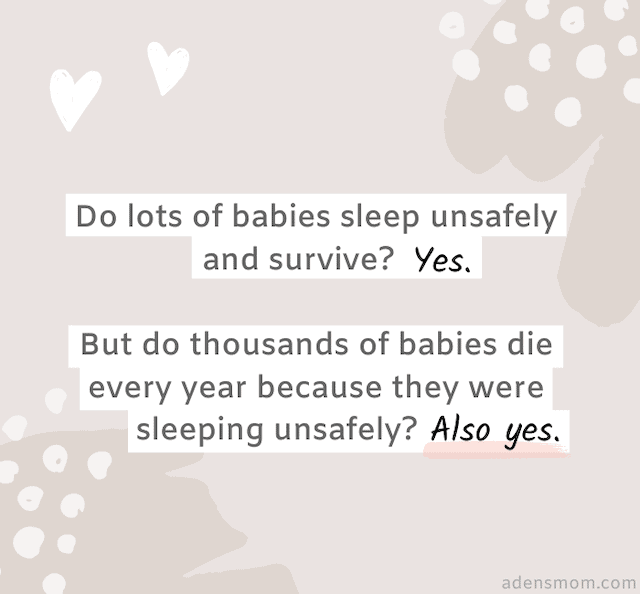 Just because a nurse and a pediatrician’s wife (I think you know who I’m referring to) thinks it’s safe to give your baby a lovey for sleep, doesn’t mean it is.

As confusing and counterintuitive as safe sleep may be, it’s a serious risk to follow any advice that’s inconsistent with the findings of large-scale scientific studies.

Unsafe advice about letting your baby sleep with a lovey

Now I’m going to call your attention to some of the unscientific “rationale” given for ignoring the fundamental safety rule not to place soft objects in the crib.

To the best of my knowlege, there are no studies supporting the following claims
(If you know of one, please let me know)

Show. Me. The. Evidence.

So, to recap: When can your baby sleep with a lovey? Even if the lovey meets all the “conditions” listed above, it’s not safe for sleep until your child is at least 12 months old. And to reiterate, it’s best to wait until the child is sleeping in a toddler bed (which you can start using at 15 months).

What are the safe alternatives to a lovey?

A pacifier is the only safe lovey alternative for a child less than 12 months old to sleep with.

In fact, not only is it safe to give your baby a pacifier at bedtime; doing so actually reduces the risk of SIDS by up to 90%.

All you need to do to benefit from this protective factor is offer the pacifier at the start of each sleep period.

It’s not actually necessary for your baby to continue to suck on it—and there’s no need to replace the pacifier when it falls out of your baby’s mouth.

How does this reduce the risk of SIDS?

We don’t actually know. All of the hypothesized mechanisms are unconfirmed.

The only thing scientists know with certainty is that there is indeed up to a 90% risk reduction of SIDS by offering a pacifier. Read the AAP’s study here.

Note: Pacifiers are safe to leave in the sleep space—but pacifier clips and Wubbanubs are not.

FAQs related to when baby can sleep with a lovey

Should I buy a breathable lovey?

If you’re looking for a safe lovey for your baby, you might have gotten tricked into the whole “breathable” marketing ploy.

“Breathable” is an unregulated term. There aren’t any standards by which to measure carbon dioxide retention levels.

Any company can claim that their products are breathable without doing any testing—or even defining the term, for that matter.

Further, there is no evidence that “breathable” baby products reduce the risk of SIDS.

If you want to buy a so-called breathable lovey, go for it. Just don’t let your baby sleep with it if he’s under 12 months old.

What about breathable stuffed animals?

There is no such thing as a breathable stuffed animal that’s safe to leave in your baby’s crib if he’s under 12 months old.

Are there any safe sleeping toys for babies?

There are no safe sleeping toys for babies under 12 months.

The single exception is a pacifier, which may or may not be considered a sleeping toy in your book.

Again, there is no such thing as a breathable lovey or a breathable stuffed animal that would be safe for an infant to sleep with in his crib.

Other than a pacifier, your baby’s crib should be completely empty to reduce the risk of SIDS and sleep-related death.

What makes a safe lovey for 6 month old?

The bad news is that there’s no such thing as a safe lovey for a 6-month old to sleep with.

The good news is that loveys are safe for supervised awake time.

The safest loveys for babies and toddlers are those that don’t have any small parts that could come off and become a choking hazard.

Look for loveys that only have embroidered facial features, rather than buttons or plastic for eyes and noses.

Here are a few safe loveys to consider:

Again, until at least 12 months old, these are only safe under supervision while your baby is awake.

When can babies sleep with taggies?

First, what is a taggie?

A taggie is a small security blanket or stuffed animal with satin loops (“tags”) around the edges. Taggies, like loveys, are a hybrid between a toy and a cozy transitional object.

When is it safe for your baby to sleep with a taggie?

Not until he is at least 12 months old. Read your crib manual to see if it allows small blankets or toys. If it doesn’t, wait until your child is in a toddler bed to let him sleep with a taggie.

When can baby sleep with a security blanket?

A baby can sleep with a security blanket when he is at least 15 months old and sleeping in a toddler bed.

Can babies suffocate on a lovey blanket?

The AAP is crystal clear that having soft objects in the sleep space is correlated with an increased risk of SIDS.