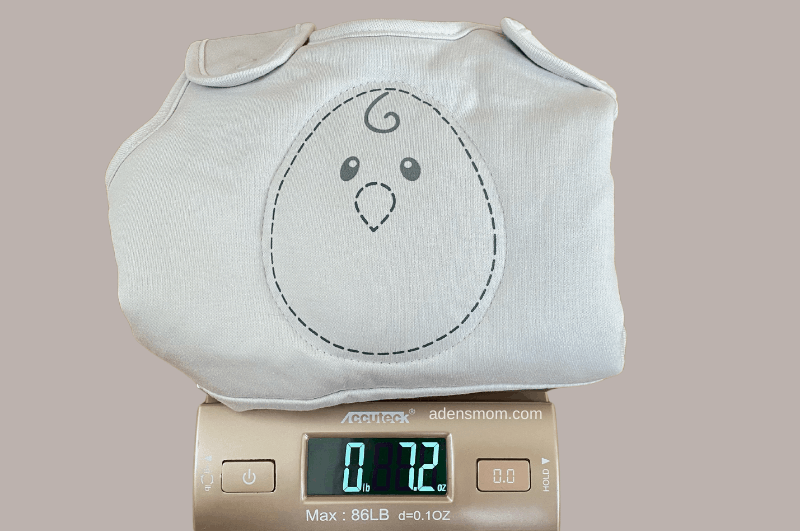 Sleep-deprived parents want to know: “Is it safe for my baby to sleep in a weighted sleep sack?”

Transitioning out of the swaddle is notoriously difficult.

Babies prefer the feeling of compression they grew accustomed to in the womb. When you take that away, it means less sleep for everyone.

This is why parents turn to “swaddle transition” products that promise better sleep.

But are these products safe?

This evidence-based guide will take a look at one of the more popular swaddle transition products, the Nested Bean sleep sack.

Here’s what we’re about to cover…

What is a Nested Bean Zen Sack?

The Nested Bean Zen Sack is a wearable blanket marketed to parents whose babies are transitioning out of being swaddled.

What makes this product different from other sleep sacks is that it contains a 1 to 5 ounce weight (which varies based on the size of the sack).

The weight is intended to “mimic the embrace” of a parent, and in turn, help the baby sleep better.

When and why to stop swaddling?

The risk of death increases greatly if a swaddled infant rolls onto their belly.

Now that we’ve covered the basics, let’s get back to the Nested Bean…

Are there safety risks associated with using a Nested Bean sack?

I’m about to outline what we know—and what we don’t—about weighted garments for infants.

Wearing a weighted garment creates a sensation of being hugged, held, or swaddled.

This pressure is purported to stimulate the release of serotonin and dopamine, which causes the autonomic nervous system to relax.

This is the system that controls things like breathing, heart regulation, body temperature, coughing, and swallowing.

These are some of the functions that are theorized to go wrong when a baby dies of SIDS.

Can weighted garments increase the risk of SIDS?

This hasn’t been sufficiently studied to say “yes” or “no”.

But, let’s consider one thing we do know:

An infant’s ability to wake easily is an important protective response to stressors during sleep.

“That is why parents like swaddling – the baby sleeps longer and doesn’t wake up as easily… But we know that decreased arousal can be a problem and may be one of the main reasons that babies die of SIDS.” 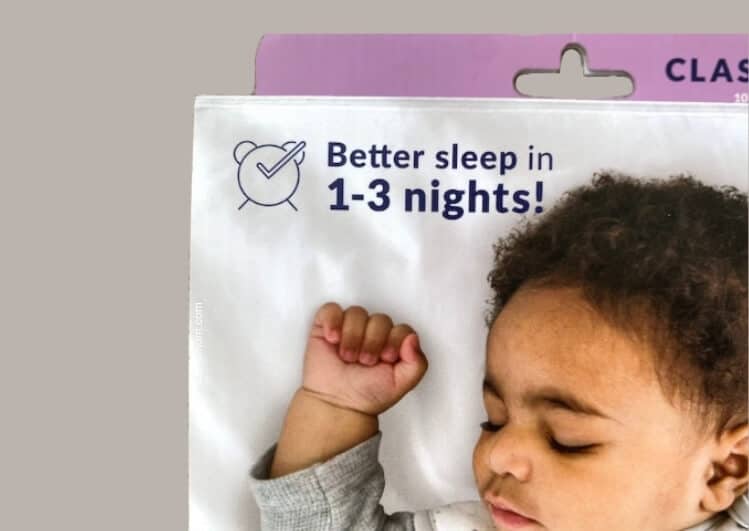 Are weighted garments safe for babies who can roll?

If you’re interested in the Nested Bean sleep sack, it’s probably because your baby has displayed signs of rolling, which means it’s no longer safe to swaddle.

The Nested Bean website claims that their weighted sleep sack is “perfectly safe” for babies who roll because the weight is “light and flexible.”

“To put on anything that impedes their freedom to move when they’re in the prone position is a problem.”

“If a baby manages to flip over and then, because of the weight, they are unable to flip back, I worry about them suffocating.” 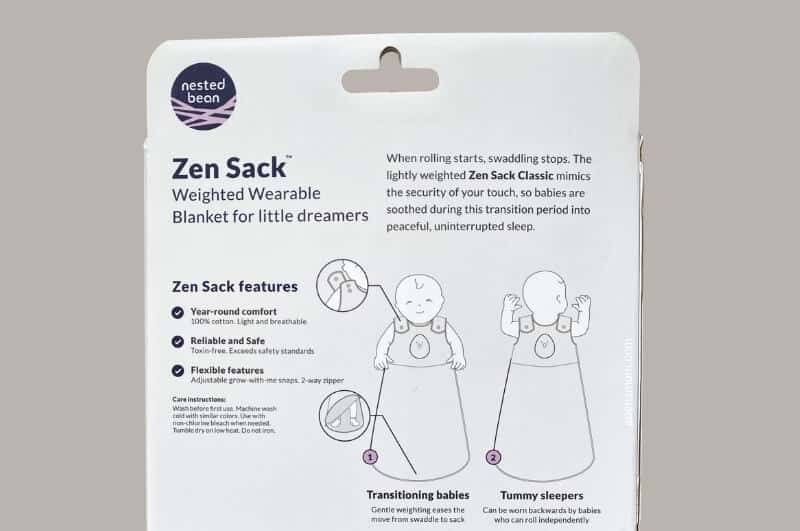 Next, we’ll examine whether there’s evidence in favor of weighted sleep sacks and swaddles being safe.

Are there reasons to believe that weighted garments for infants may be safe?

A recent trial conducted in 2020 took a look at the safety and effectiveness of weighted blankets in caring for infants being treated in the NICU for neonatal abstinence syndrome (NAS).

The study, which had 16 participants, found “no adverse events” during any of the 30-minute sessions during which the infants were covered with weighted blankets and continuously monitored.

The authors recommended continuing to use weighted blankets to treat NAS in monitored infants in a NICU setting.

They proposed further studies to evaluate the safety of weighted blanket use in non-NICU settings where infants aren’t continuously monitored.

What you need to know:

The design of this study, with its 16 participants, is completely inadequate for the purpose of assessing risk in the general population.

The study has no bearing whatsoever on the potential risks of a baby sleeping in a weighted sleep sack every night.

In addition to the aforementioned study, there’s the fact that no deaths linked to the Nested Bean products have been reported to the CPSC.

On one hand, this may be promising, since the products have been used by many thousands of infants.

On the other hand, this doesn’t tell the full story.

The CDC warns of the “failure to adequately investigate all infant deaths”, saying that accidental deaths “have been missed” due to, in part:

Additionally, medical examiners are not required to notify the CPSC of the product(s) involved in SIDS investigations.

What about weighted garments for children?

Weighted garments are used as doctor-prescribed treatment for children (not babies) with autism and sensory processing disorders.

However, there is a lack of scientific evidence to establish the therapeutic value of this type of intervention.

As the NHS (the UK’s healthcare system) explains,

“There remains insufficient evidence to guide wearing times and optimal weighting or compressive forces. The risk of negative biomechanical stress has not been adequately examined. Further research is required to inform development of specific guidelines and protocols for practice.”

As a result, the NHS discourages the use of weighted or compressive products for children.

If parents and caretakers choose to use these products anyway, the NHS has provided a list of precautions to minimize risk.

3 noteworthy safety rules from the NHS

As you can see, all of these precautions preclude the use of weighted garments for infants.

Note: As of the original publish date of this article, in the United States, the AAP and the CPSC have not taken an official stance on the use of weighted garments for either infants or children.

What does Nested Bean say?

Nested Bean wants you to believe you’re being “paranoid” by questioning the safety of their product:

“Out of sheer paranoia, parents have started avoiding the most benign child care products, often without understanding the facts about SIDS.” –Nested Bean

But as shown above, concerns extend beyond paranoid parents into the medical community from people who understand SIDS quite well.

In addition to calling parents paranoid, Nested Bean makes a number of claims defending the safety of their products.

"All of our products have been designed according to the AAP's Guidelines for Safe Sleep."

This statement is deceptive.

The guideline they’re referring to is the recommendation to use a sleep sack instead of a loose blanket.

At no point in the guidelines did the AAP directly discuss weighted sleep sacks.

The assumption that this benign statement included weighted garments came entirely from the Nested Bean company and not the AAP.

"The weight in our products is maintained well below the recommended weight to body-weight ratio according to physiotherapy therapy standards (1:10)"

This is highly misleading.

The safety standards they claim to exceed have nothing to do with the garment being weighted.

"All Zen Sleepwear has undergone extensive tests to meet both mandatory and voluntary safety standards."

This may be true, but don’t be misled…

The only testing Nested Bean did (as listed on their website) is construction safety tests, fabric quality tests, and chemical detection tests.

(None of this has anything to do with SIDS risk.)

But haven’t lots of babies survived sleeping in a Nested Bean sleep sack?

Indeed they have; but SIDS is a rare event and it is very difficult to assess risk factors associated with rare events.

Given the current state of research, we can’t say for sure whether or not weighted sleep sacks increase or decrease risk. But, the fact that lots of babies have survived does not change our state of uncertainty.

Keep in mind that it’s not always obvious, even to the experts, that certain behaviors are risky.

To give you an example, it wasn’t until very recently, 1994, that scientists were able to figure out what’s now known to be a fundamental risk factor for SIDS, stomach sleeping.

This was discovered by painstakingly collecting and analyzing large amounts of data on incidences of SIDS.

Identifying this one risk factor and teaching parents about the importance of placing babies on their backs saves thousands of lives every year.

This never would have happened had we skipped doing the research based on the observation that lots of babies survived sleeping on their stomachs.

But isn't the Nested Bean sleep sack only "gently" weighted?

I bought the size small sleep sack (intended for a 7-pound infant) and weighed it myself.

This would be the equivalent of a 10lb blanket for a 150lb adult, which isn’t all that light. 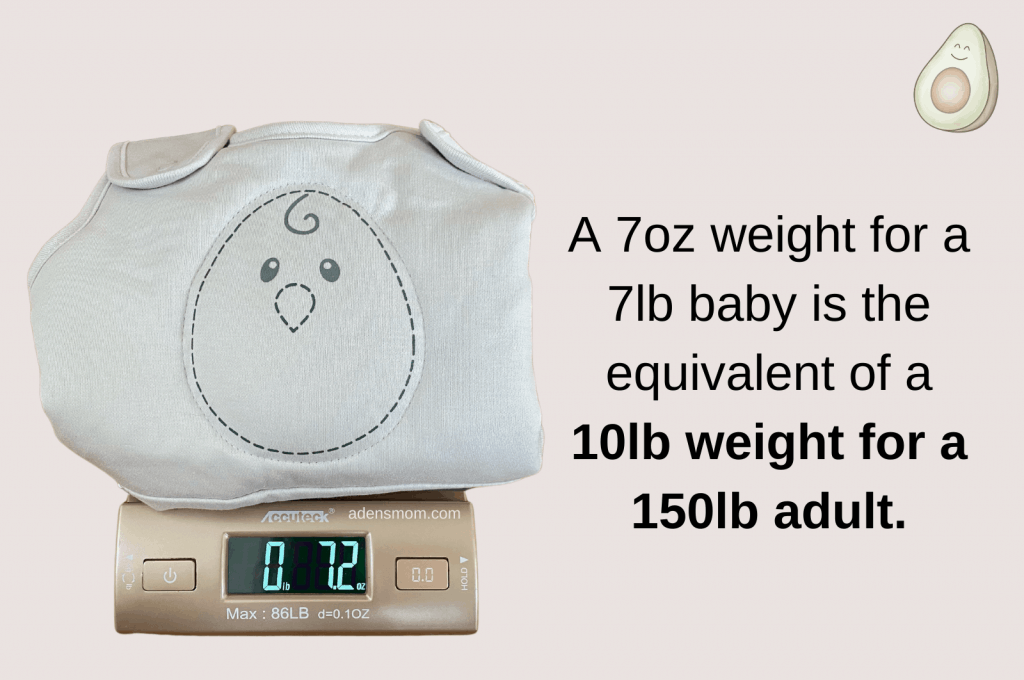 Nested Bean seems to care a lot about AAP guidelines. Haven't they made sure they're following the rules?

Image after image on their reviews page shows babies sleeping in unsafe conditions—conditions that go directly against AAP guidelines for preventing SIDS.

I spy pictures of…

Nested Bean knows better as you can see from this screen shot from their website:

It’s worth remembering that Nested Bean is a company that makes money selling a product. They are not a medical organization.

What about all the positive Nested Bean sleep sack reviews?

Any product that gets an infant to sleep “better” is going to receive positive reviews from sleep-deprived parents.

Not to mention, lots of people assume a product is safe just because it’s sold by all of the major retailers.

This is exactly what worries the chairperson of the AAP’s SIDS task force, Dr. Rachel Moon.

“What concerns me is that a lot of parents think there is a proactive agency that checks all of these products before they go on the market, like an ‘FDA’ for (SIDS) products. But there isn’t.” (Source)

Just because a product appears to be safe and is highly reviewed by other parents, doesn’t mean that it is safe.

Do weighted garments even work?

According to a randomized controlled trial by the AAP, weighted blankets did not help autistic children sleep better.

Might weighted sleep sacks such as the Nested Bean help infants sleep better?

This hasn’t been adequately studied by scientists who are unaffiliated with the Nested Bean brand.

What should babies wear under a Nested Bean sleep sack?

If you decide to use a Nested Bean sleep sack, it’s critical to dress your baby properly for sleep to prevent overheating and any further reduction of an appropriate arousal response.

As with all sleep sacks, you should dress your baby based on the temperature of the room, being sure to avoid over-bundling.

Feel your baby’s core to ensure he is warm but not hot.

When in doubt, dress your baby in fewer layers rather than more layers. It’s better for an infant to be slightly too cold than too warm.

Related: How to Keep a Baby Warm at Night

The “Classic” Nested Bean sack is a 0.5 TOG. (TOG is a measure of thermal insulation). So, if your baby’s room is 71 degrees, for example, you would dress him in long sleeve pajamas without any additional layers.

In other words, wearable blankets are not subject to mandatory safety testing.

Sleep sack manufacturers can claim whatever they want to about the safety of their products.

Are there safer alternatives to the Nested Bean?

If you’re looking for a swaddle transition product, your best bet is the Zipadee Zip, which you can read all about here in this evidence-based guide.

That said, the safest Nested Bean alternative is a regular sleep sack without any gimmicks.

Related: How to Keep a Baby Warm at Night (Evidence-Based Guide)

Is Nested Bean safe for newborns?

Adding weight on top of a newborn’s body may increase the chance of suffocation. 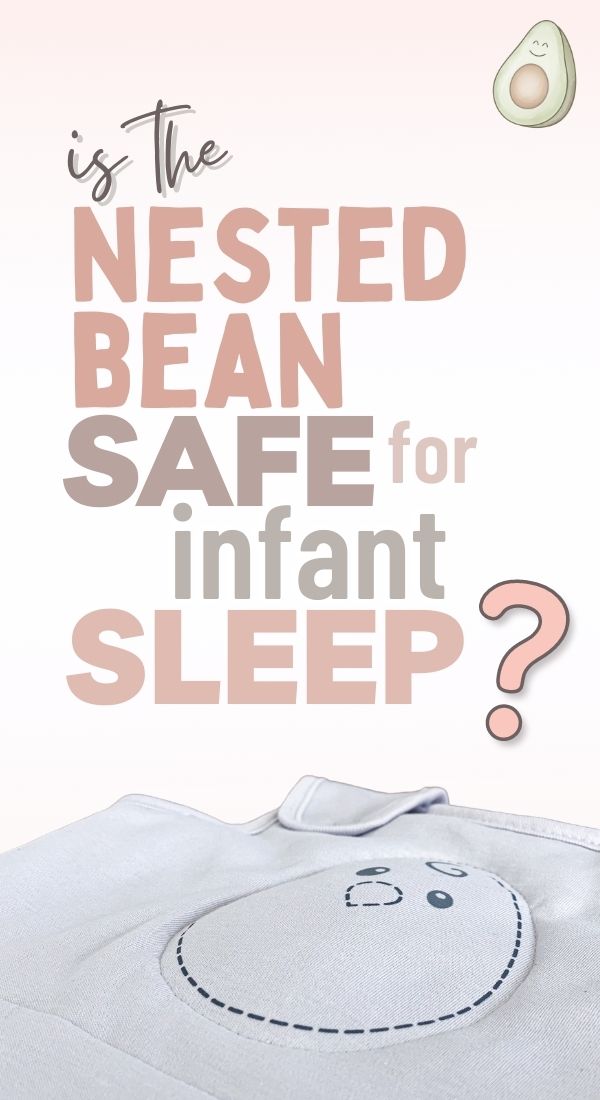