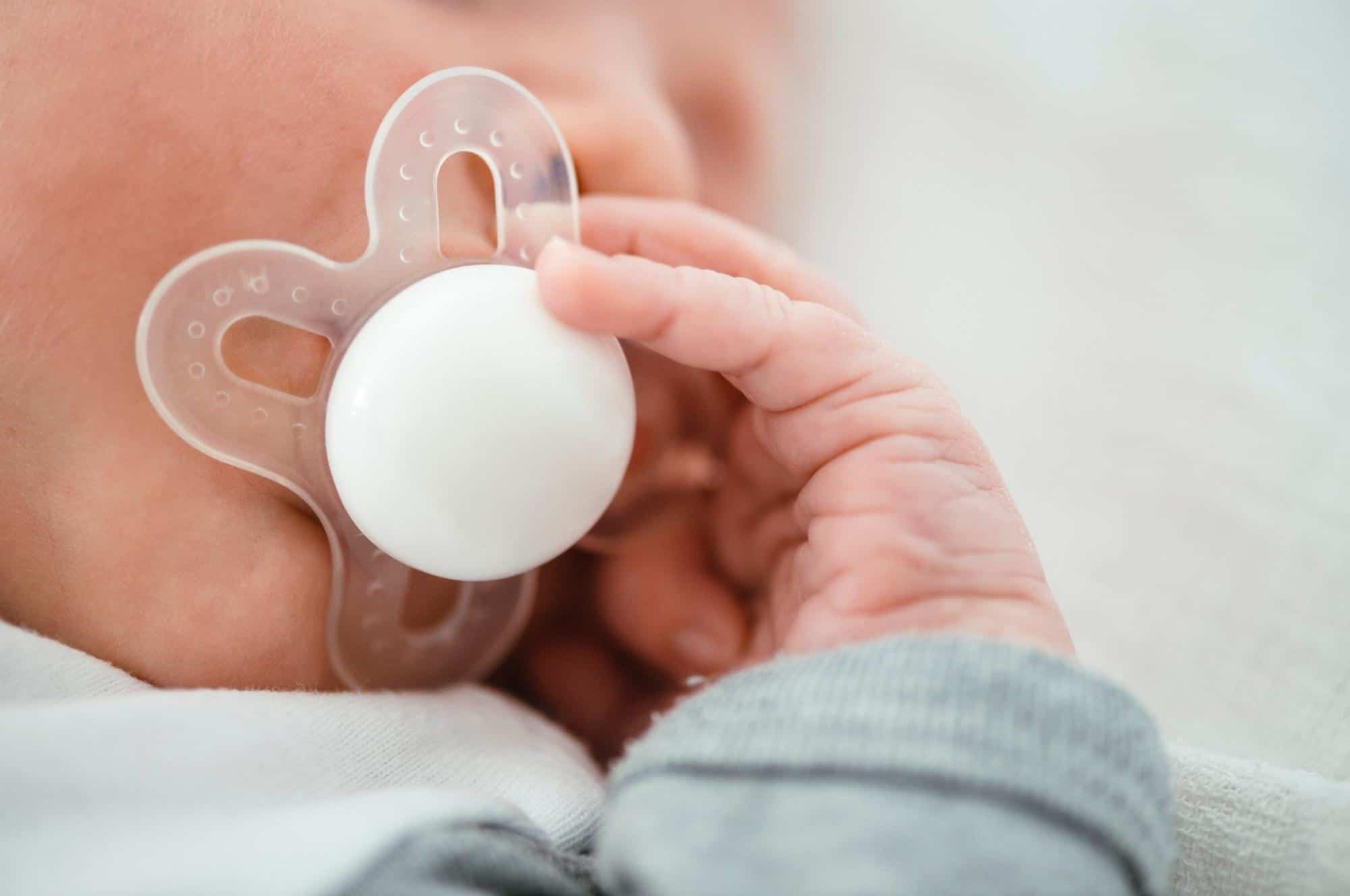 Are Pacifiers Safe for Sleep? Everything You Need to Know

Are Pacifiers Safe for Sleep? Everything You Need to Know

AHEAD: Everything you need to know about letting your baby sleep with a pacifier.

Pacifier, paci, binky, soother, nuk, dummy… whatever you call these small rubber miracles, chances are, your baby is a fan.

But are they a safety risk during sleep?

Does pacifier use need to be supervised?

Can a baby sleep with a pacifier all night?

This evidence-based guide will answer your most frequently asked questions about whether pacifiers are safe for sleep.

P.S. Just for fun, I polled my largest mom group to see which pacifier nicknames were most popular. 11/8/21 results coming soon!

Is it safe for a baby to fall asleep with a pacifier?

Yes. According to the AAP, it is safe to let your baby sleep with a pacifier.

Not only is it safe, but doing so may decrease the risk of SIDS by up to 90%.

The specific mechanisms that cause this decreased risk are unconfirmed. (More information on this in a moment).

Should I remove the pacifier once my baby is sleeping?

…and can a baby sleep with a pacifier all night?

It isn’t necessary to remove your baby’s pacifier once they fall asleep.

It’s perfectly fine for them to sleep with a pacifier in their mouth all night or throughout the entirety of their nap.

Pacifier use does not require supervision, provided you follow the basic safety guidelines we’ll discuss in this article.

Is it safe for a baby to sleep on their stomach with a pacifier?

Yes! Your baby can sleep on their stomach with a pacifier.

Pacifier or not, be sure to follow these safety guidelines if your baby is rolling over:

Is it safe for my baby to sleep with multiple pacifiers in their crib?

Many parents find that creating a “paci garden” (placing a handful of pacifiers throughout the crib) makes it easier for a baby to find their pacifier if it falls out during the night.

How can I make sure my baby doesn’t choke on their pacifier?

There are a few things to look for to ensure that your baby’s pacifier isn’t a choking hazard:

The AAP also recommends only using pacifiers “that cannot possibly come apart.” Those molded of one solid piece of plastic are particularly safe. 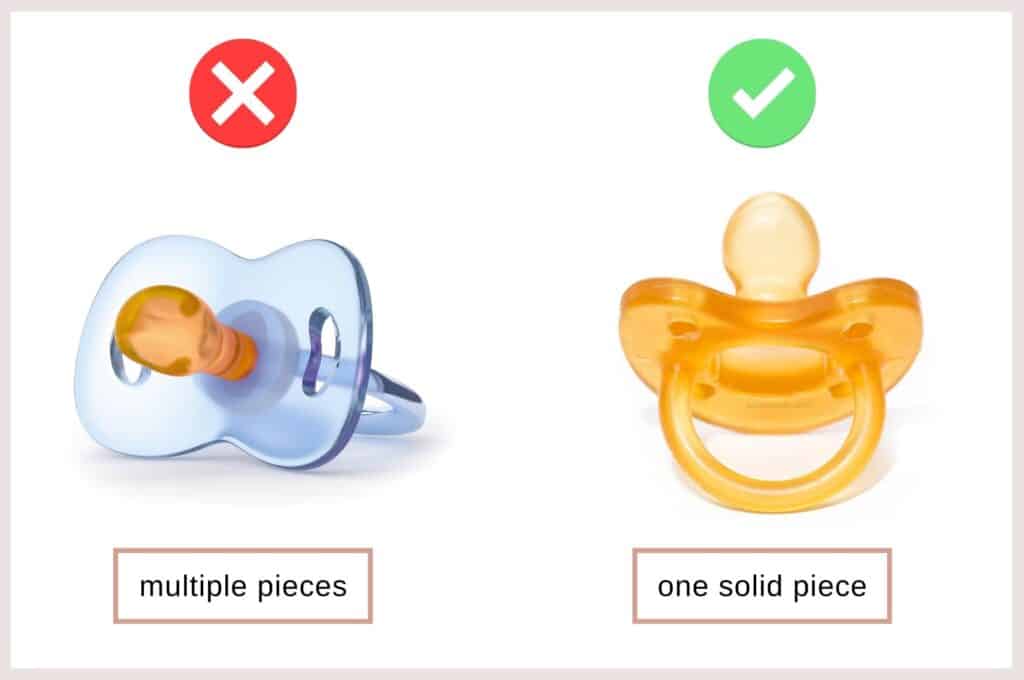 Be sure to inspect your baby’s pacifier from time to time to see whether the rubber has either torn or changed color. If so, replace it.

You can also check for recalled pacifiers or those with reports of harm at SaferProducts.gov.

Are pacifier clips safe to sleep with?

No. Pacifier clips in an infant’s sleep space are a strangulation hazard.

Attaching a pacifier clip to the baby makes this even more of a risk.

“Never tie a pacifier to your child’s crib or around your child’s neck or hand. This is very dangerous and could cause serious ­injury or even death.” –AAP

Are Wubbanubs safe to sleep with?

“Objects, such as stuffed toys, that may present a suffocation or choking risk, should not be attached to pacifiers.” –AAP

To learn more about why this is a hazard, read When Can Baby Sleep with a Lovey? (and be sure to watch the video of the near-tragedy).

Yes. Pacifiers must pass safety testing by an accredited and CPSC-accepted third-party laboratory.

You can check if a pacifier meets current safety standards by looking for the following:

How and why do pacifiers reduce the risk of SIDS?

The AAP recommends offering your baby a pacifier at the onset of sleep to reduce the risk of Sudden Infant Death Syndrome (SIDS).

…and not just for a small reduction in risk…

According to the AAP’s 2016 technical report,

“Multiple case-control studies and 2 meta-analyses have reported a protective effect of pacifiers on the incidence of SIDS, particularly when used at the time of the last sleep period, with decreased risk of SIDS ranging from 50% to 90%.”

Incredibly, there is no indication that it is necessary for the baby to suck on the pacifier for any particular amount of time in order to receive this protective factor.

In other words, even if the pacifier falls from your baby’s mouth shortly after offering it, the SIDS risk reduction of up to 90% still applies.

The mechanism of protection is yet unclear… which kind of makes all of this sounds like pseudoscience. But it isn’t.

Proposed mechanisms include increased arousability (ability to wake up in response to stressors during sleep) and improved autonomic control (regulation of bodily functions such as heart rate and respiratory rate).

So, in short: Pacifiers DO reduce the risk of SIDS. And even though we don’t know exactly WHY, it’s worthwhile for parents to offer a pacifier at the start of each sleep period.

(If the baby does not want to take the pacifier, it should not be forced).

Pacifiers can be a lifesaver for parents who want to soothe their baby and get some much-needed rest.

Thankfully, it is indeed safe for a baby to sleep with a pacifier.

They can keep the pacifier in their mouth throughout the duration of the sleep period. There’s no need to remove it once the baby falls asleep.

It’s also safe for your baby to sleep in any position with their pacifier—even on their stomach—as long as they roll on their own. (Always place your baby down to sleep on their back).

Best of all, pacifiers actually decrease the risk of SIDS.

Keep in mind that there are a few important precautions to take in regard to safe pacifier use. Be sure to purchase a regulated pacifier with a shield that’s at least 1.5 inches across. The safest pacifiers are one solid piece.

Never allow your baby to sleep with a pacifier clip, a Wubbanub, or anything attached to the pacifier.

Final thoughts on letting your baby sleep with a pacifier

The vast majority of tools that help a baby sleep are a safety risk.

So the fact that pacifiers are not only safe, but actually reduce the risk of SIDS (and so dramatically), is an absolute miracle in my book.

It’s nice to be the bearer of good news for once.

Typically, adding anything to the sleep space to make it more “comfortable” is a big no-no.

Blankets under or over baby? No.

Lovey or stuffed animal? No.

Bumpers lining the crib? No. 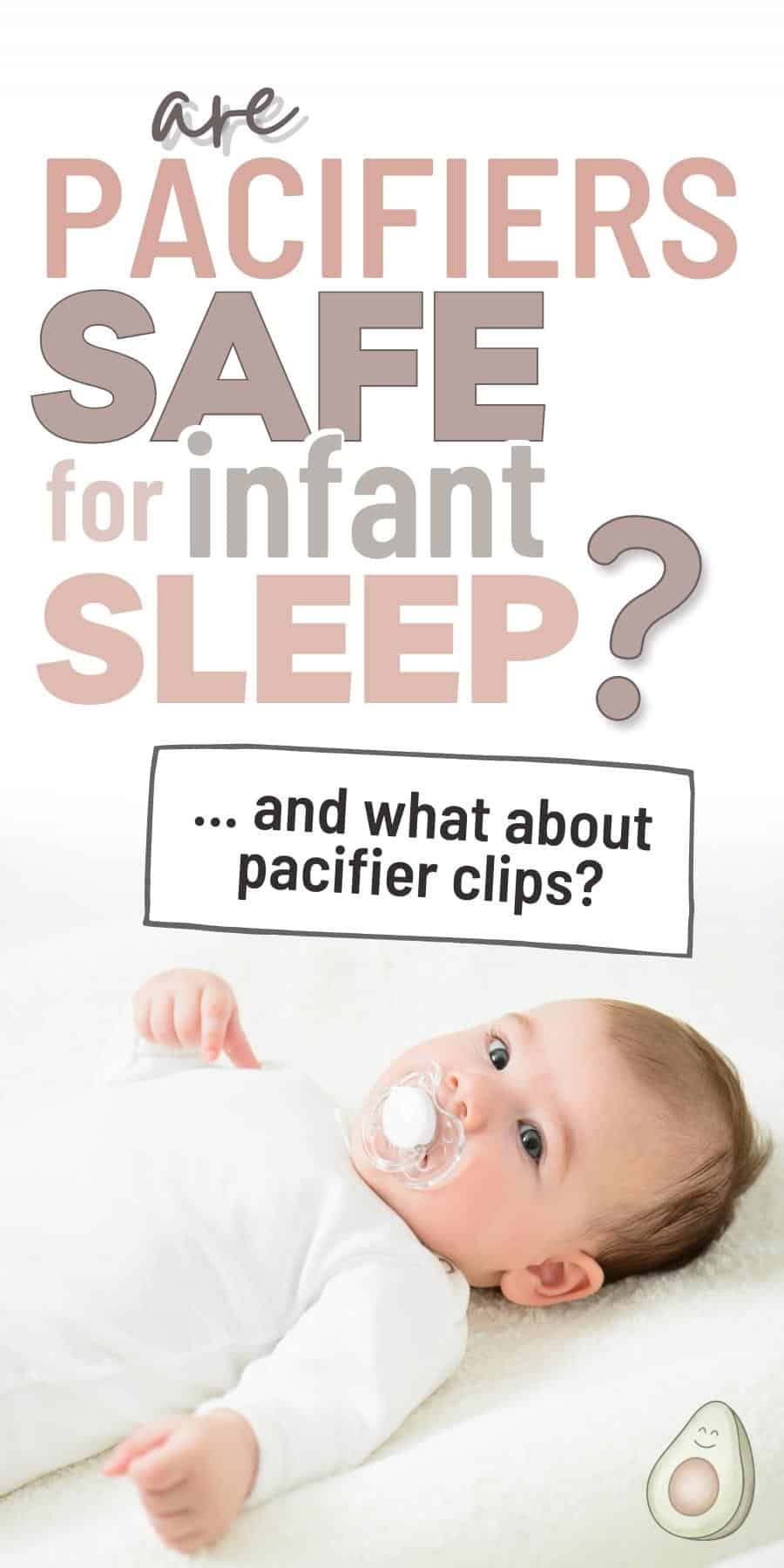 Are Pacifiers Safe for Sleep?