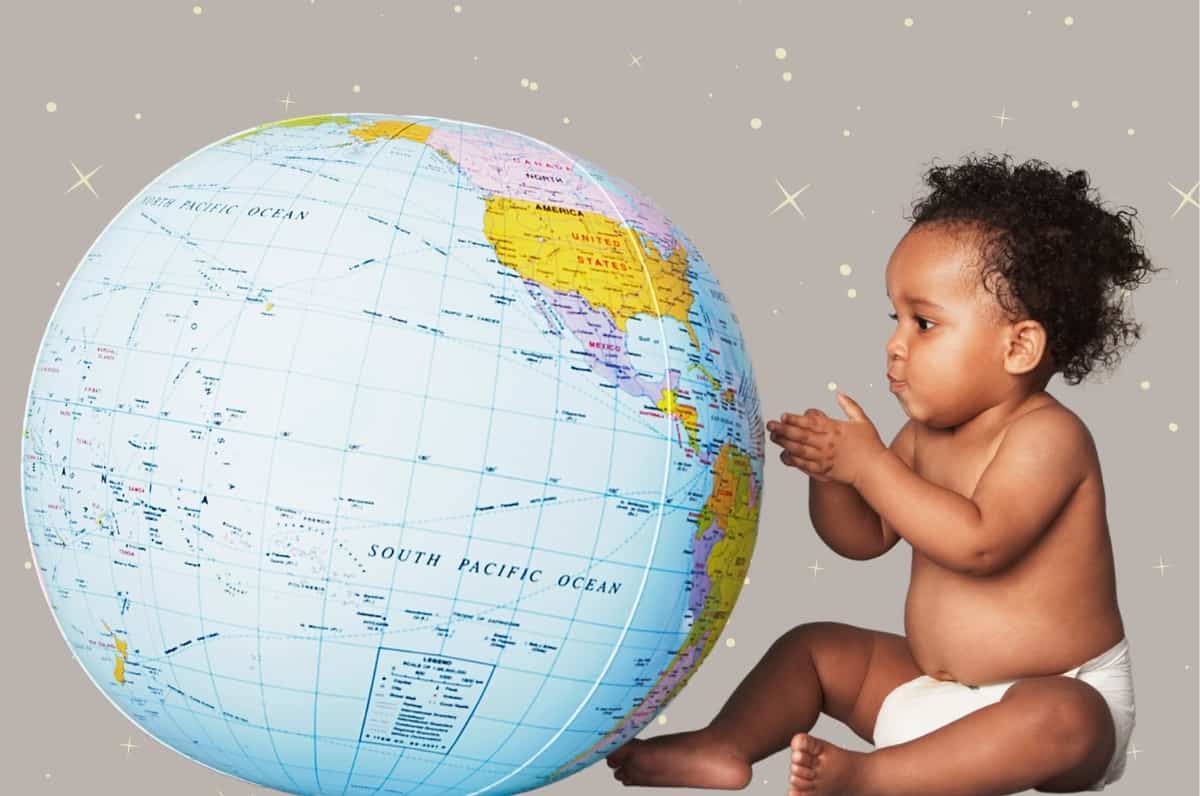 100+ Space Names for Babies that are Actually Cool

100+ Space Names for Babies that are Actually Cool

AHEAD: The ultimate list of out-of-this-world space baby names.

If you’re looking for a quirky but not totally alien baby name, you’re in the right place.

Because let’s be honest: Luna is cool but it’s wayy too popular right now.

And Andromeda is very space-y but you’re probably not naming your child that, are you?

This mega-list of space names for boys and girls will hopefully strike the right balance.

These baby-name-worthy ideas come from the planets, moons, stars, galaxies, and everything in between!

Some are even inspired by famous astronauts, scientists, and characters in movies about outer space.

So put on your astronaut helmet and let’s blast off!

Use the TOC below to navigate to your baby’s gender…

This first batch of space names for girls is slightly eclectic but not too weird.

One of the brightest stars in the sky. It’s more than 10 times the sun’s diameter.

Alexis Clairaut was a [male] French astronomer whose work led to predictions about the motions of the Moon and planets.

Ariel is the fourth-largest moon of the planet Uranus.

A natural light display in the Earth’s sky caused by the interaction of the solar wind with Earth’s magnetosphere. 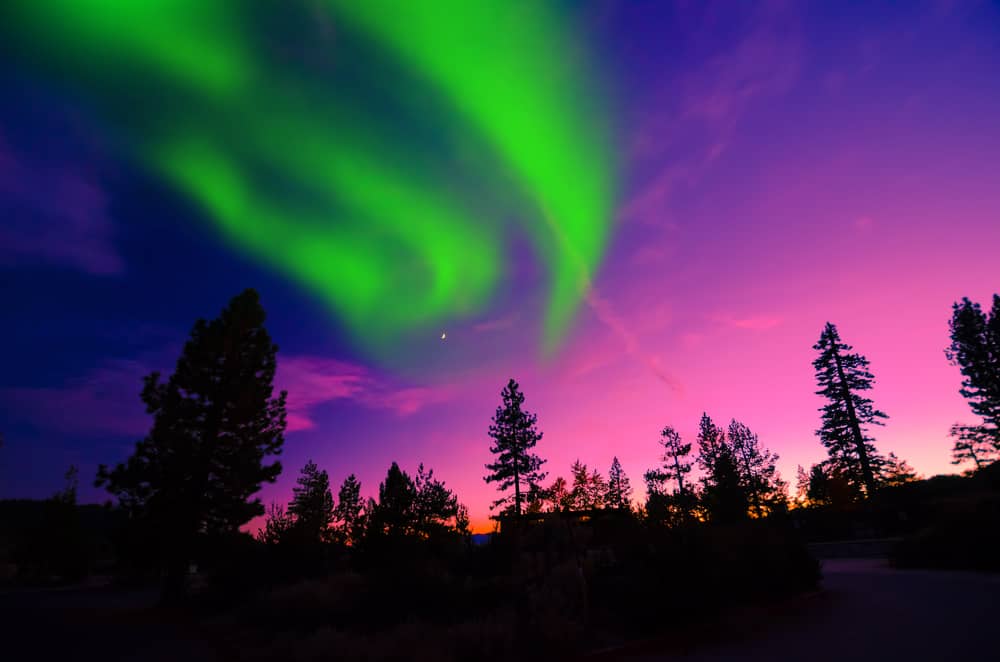 Baily’s Beads are bright spots of sunlight that shine along the edge of the moon’s silhouette during an eclipse of the sun. 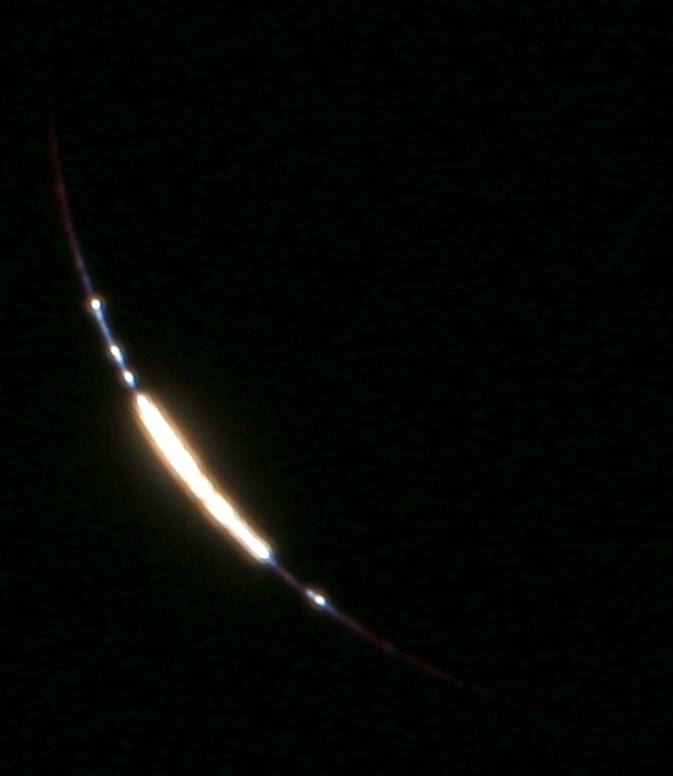 A constellation meaning ‘Keel of the Argonauts’ ship’. (A keel is a beam that runs across the body of a ship). 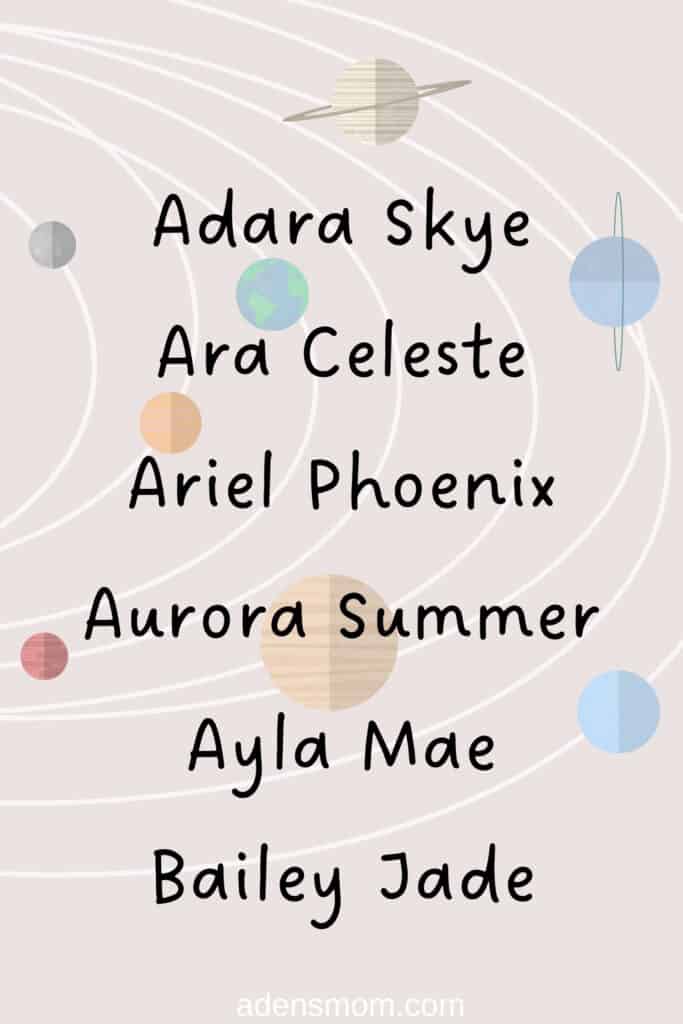 The birthplace of Artemis, a Greek goddess of the moon.

Elara is the 8th largest moon of Jupiter.

Halley’s Comet can be seen twice in one person’s lifetime. It’s expected to be visible again in mid-2061. 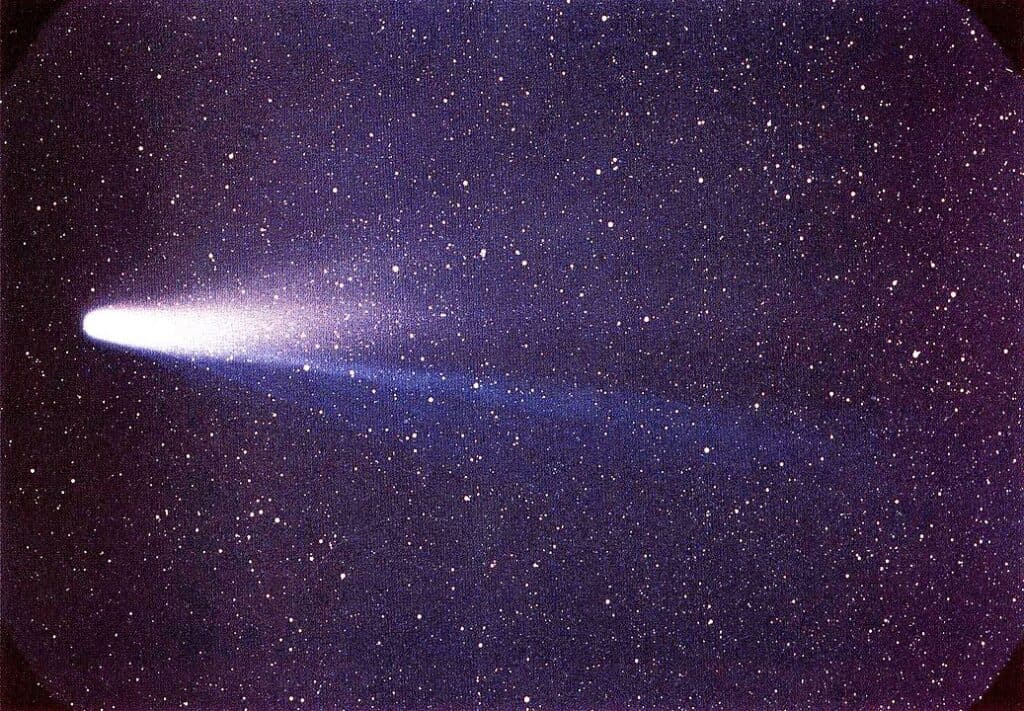 Kehlani or Kailani or Kaylani

Princess of the fictional planet Alderaan in the Star Wars movies. 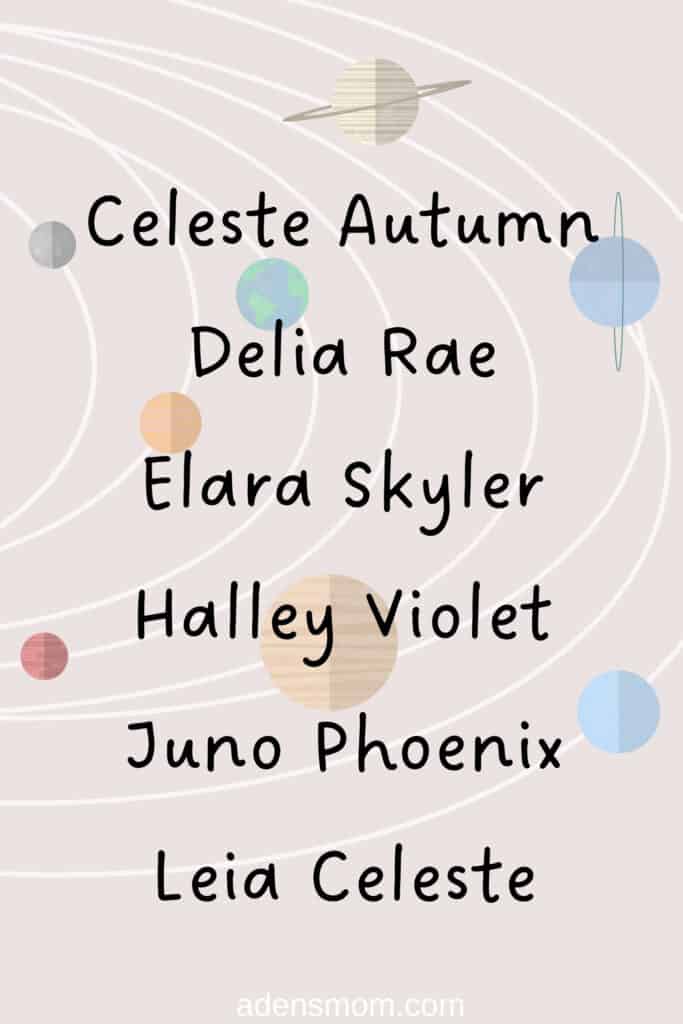 Mae Jemison was the first African American woman in space in 1992.

Meri is a god of the sun in the mythology of the Brazillian Bororó people.

A star that suddenly and dramatically increases in brightness and then slowly returns to its original state. 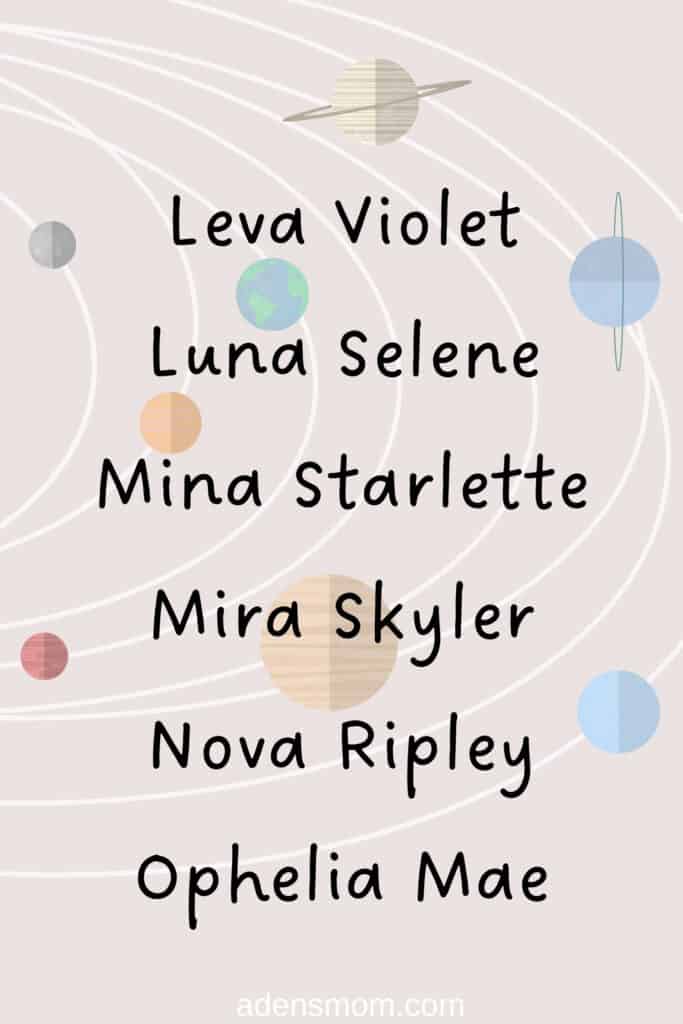 An inner satellite of the planet Saturn.

An irregular satellite of the planet Saturn.

A constellation in the southern sky named after the mythical bird.

A moon of Uranus. It will eventually break up into a planetary ring or hit Uranus.

The second-largest moon of the planet Saturn.

Uncoincidentally part of the word ‘constellation’.

Ultraviolet astronomy is the observation of electromagnetic radiation. 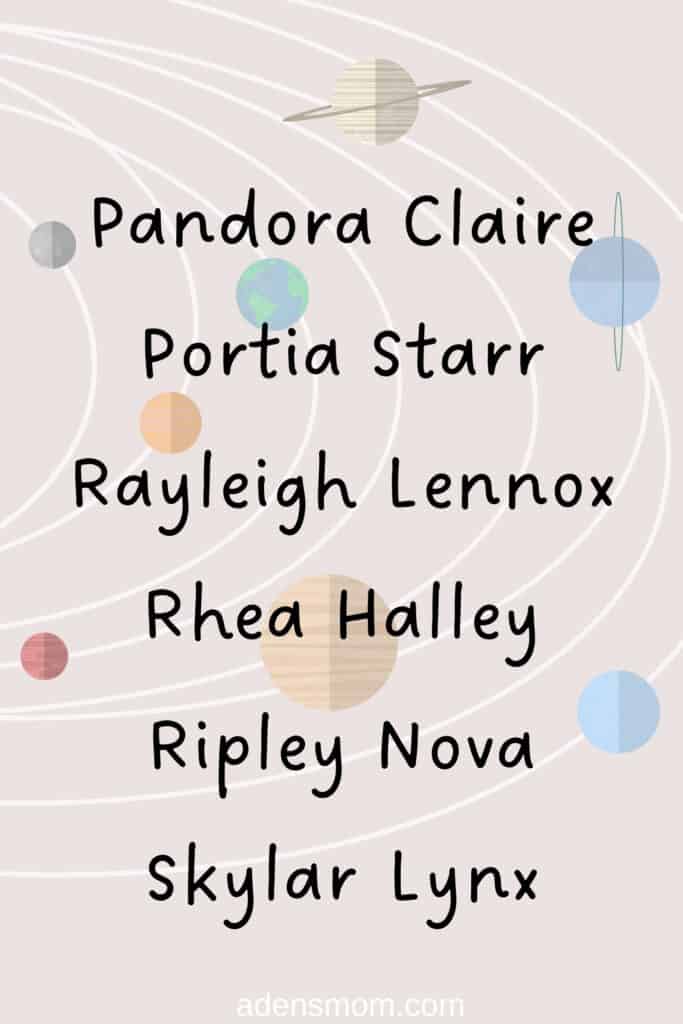 These space names for girls are a little bit “out there”, making them really cool middle names. Or, if you like unusual first names, these will be right up your alley!

A constellation meaning ‘altar’, where in ancient Greek mythology, the gods made offerings.

A halo of light around the moon.

A constellation of a wild cat.

Mina is the Hindu equivalent of Pisces.

Sally Ride was the first female American astronaut to make the journey to space. 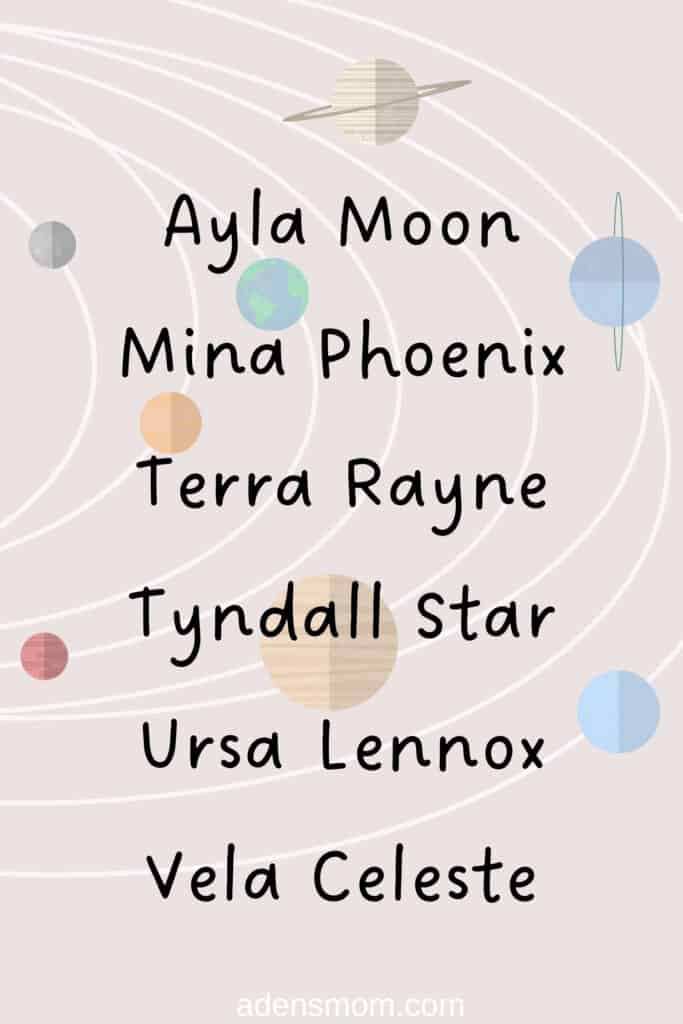 A constellation meaning Sail of the Argonauts’ ship.

Below, you’ll find a WHOLE BUNCH of great ideas. Some of these combinations have outer space first names AND middle names. Others are a mix of celestial and ‘terrestrial’ (i.e. the second name isn’t space-y).

What is more exciting than space?

Hopefully, you’ve picked an out-of-this-world name that will make your daughter feel like she’s the center of your universe (which she’s going to be no matter what).

If you haven’t decided on the perfect name, or if you’re not 100% sure you want a space name for your baby girl, here are some other lists to check out:

If you happen to be having a boy or you don’t know your baby’s gender, keep on scrolling for space names for boys! 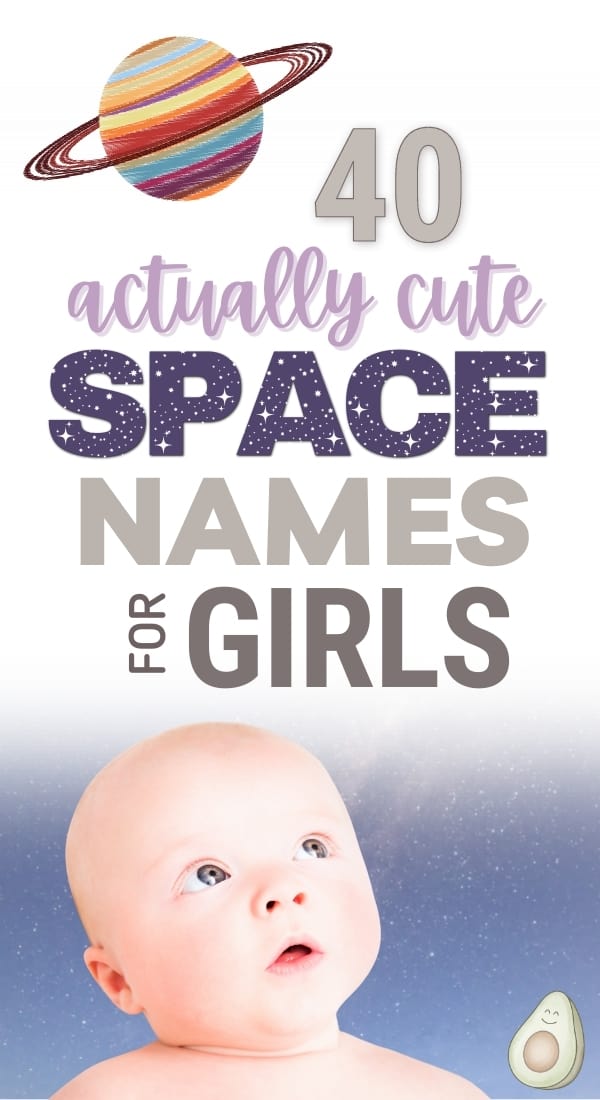 This first batch of space names for boys is slightly eclectic but not too weird. Some are even mainstream right now.

A NASA spaceflight program that succeeded in landing the first humans on the Moon. 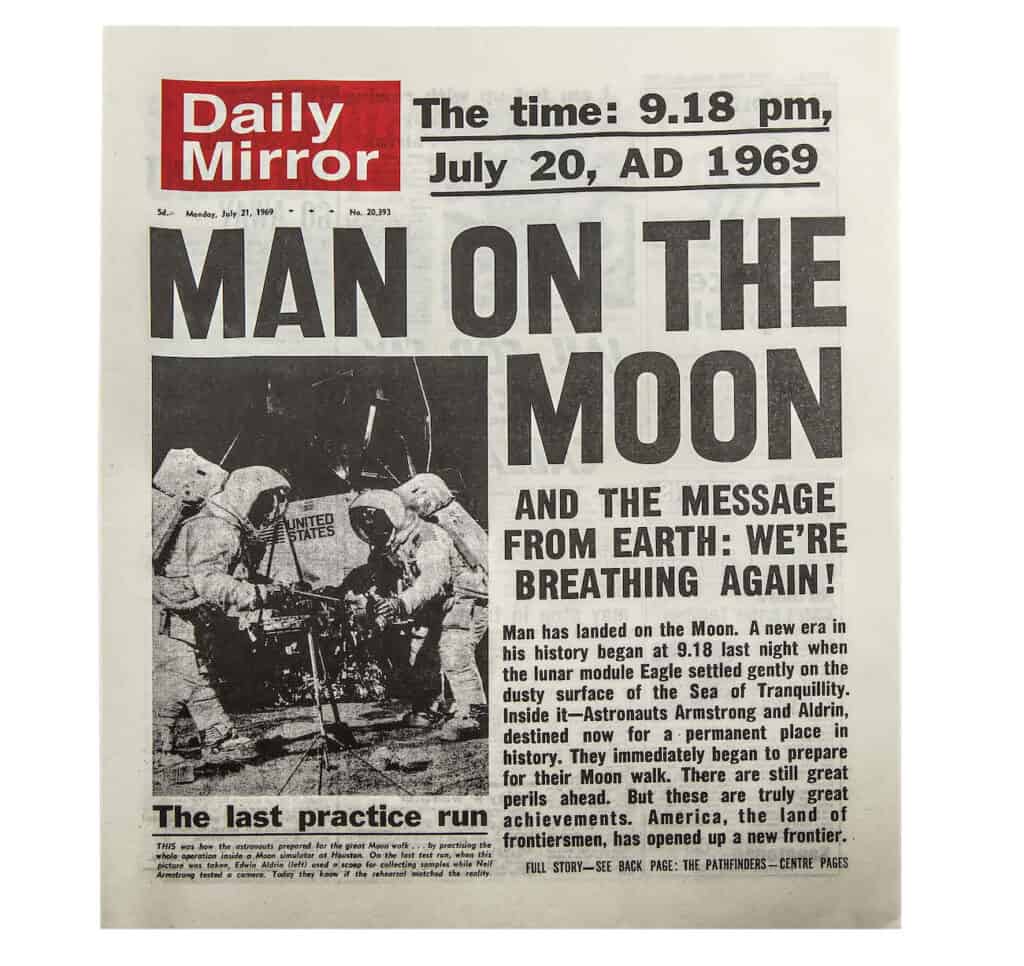 In Greek mythology, Atlas was a Titan forced to hold up the celestial heavens or sky for eternity.

In July 2021, business magnate Sir Richard Branson flew above the U.S. definition of outer space as part of a test flight for his company, Virgin Galactic.

Frank Drake pioneered the search for extraterrestrial intelligence and was one of the founders of SETI.

Finlay or Finley or Finn

William Henry Finlay was a South African astronomer known for his work on comets. 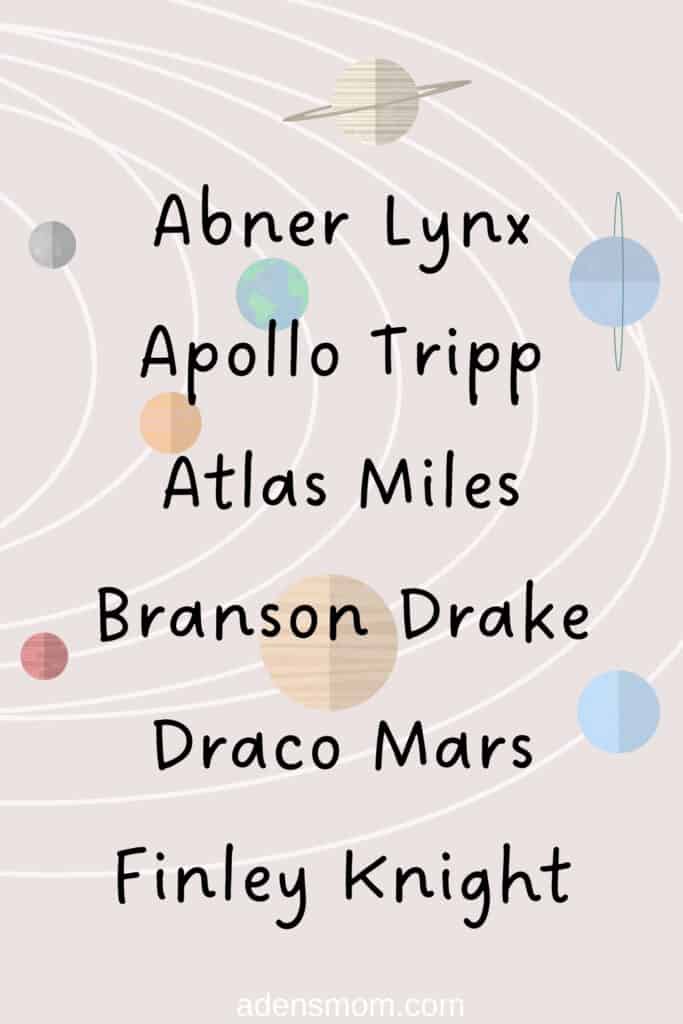 Isaac Newton invented celestial dynamics, the law of gravitation, and the reflecting telescope.

James T. Kirk was the captain in Star Trek: The Original Series who embodied the principles of the Confederation to go “Where no man has gone before”.

Luke Skywalker is the legendary Jedi Master from Star Wars.

Marvin the Martian is an extraterrestrial character from the Looney Tunes. Marvin is also the “paranoid android” from The Hitchhiker’s Guide to the Galaxy.

Neil Armstrong, an American astronaut, was the first person to walk on the Moon. 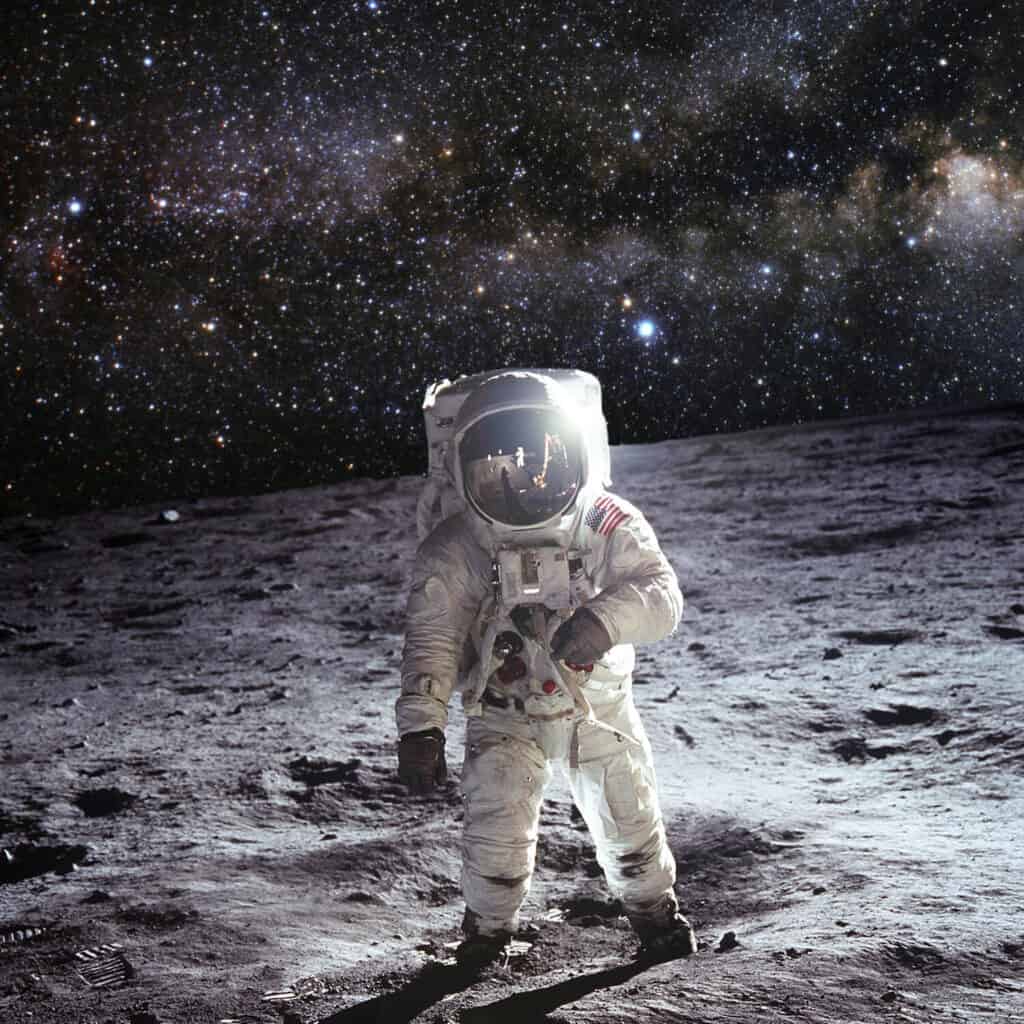 Isaac Newton invented celestial dynamics, the law of gravitation, and the reflecting telescope.

A star that suddenly and dramatically increases in brightness and then slowly returns to its original state.

A constellation in the southern sky.

Will Riker was First Officer on the Enterprise in Star Trek: The Next Generation. 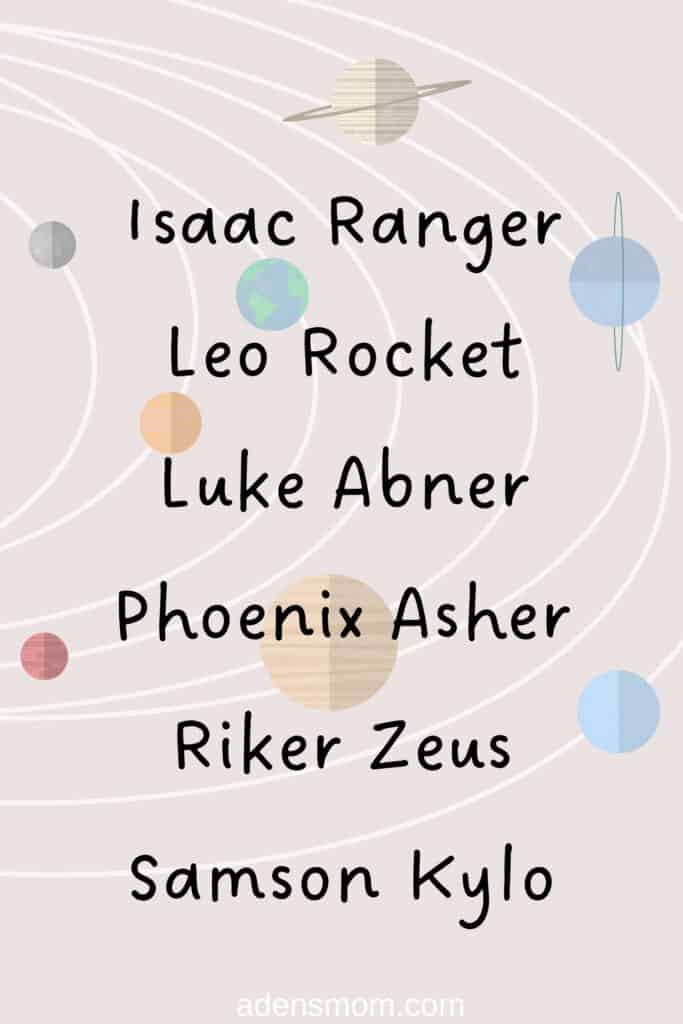 These space names for boys are a little bit “out there”, making them really cool middle names. Or, if you like unusual first names, these will be right up your alley!

A Barlow Lens doubles or triples a telescope’s focal length.

Buzz Aldrin is an American astronaut known for making 3 spacewalks. And of course, Buzz Lightyear is a space ranger in the Toy Story movies. 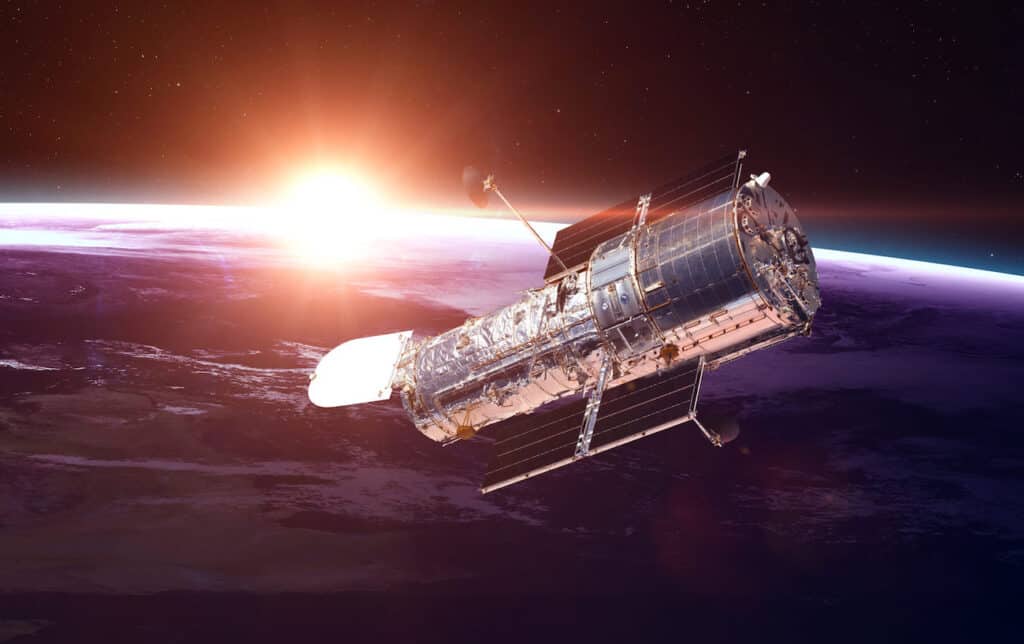 An astronomer who during the Renaissance devised a system that correctly described the details of the motion of the planets around the Sun.

A constellation of a wild cat. 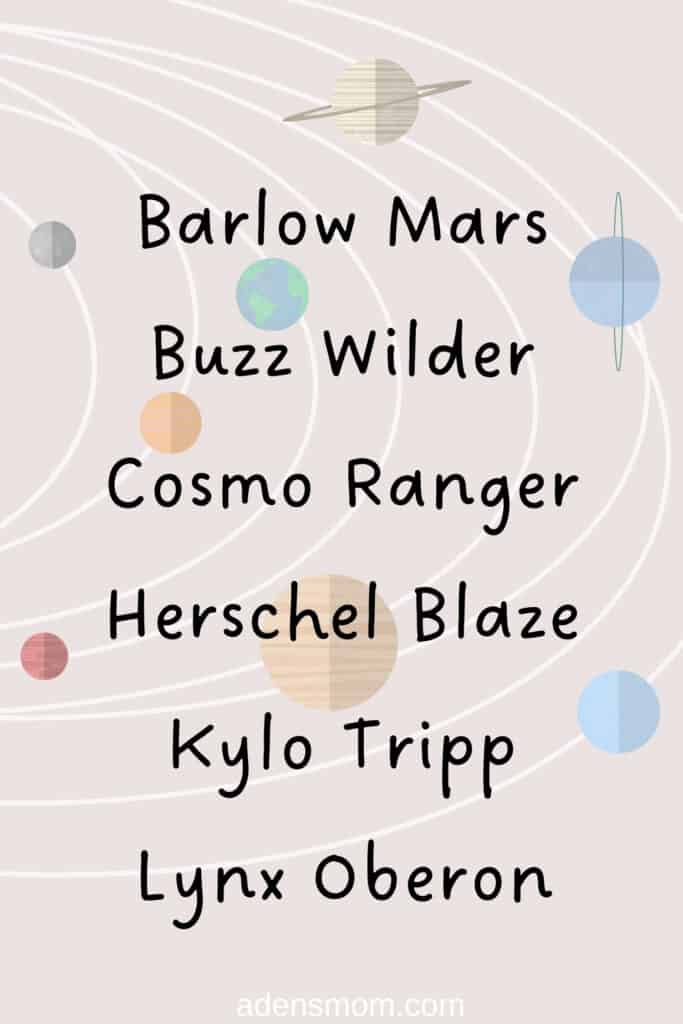 The outermost major moon of the planet Uranus.

The largest moon of the planet Saturn.

In Greek mythology, the Titans were the children of deities Uranus (heaven) and Gaea (​earth). 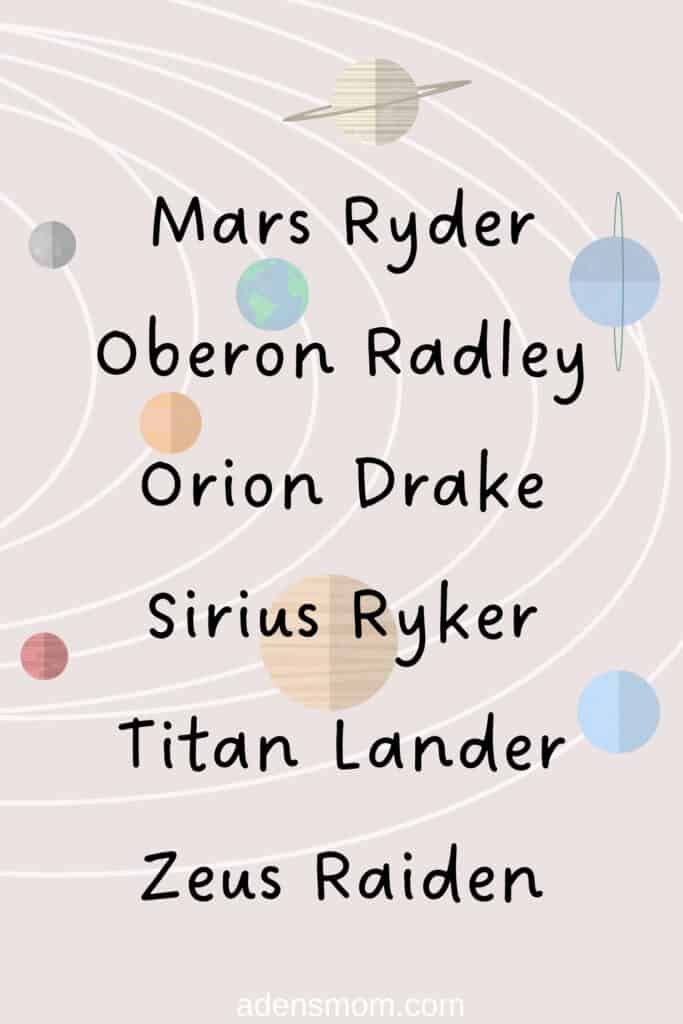 Here are a few fun middle names to pair with a boys’ space-themed first name:

Below, you’ll find a WHOLE BUNCH of great combinations. Some have outer space first names AND middle names. Others are a mix of celestial and ‘terrestrial’ (i.e. the second name isn’t space-y).

How do you get a baby astronaut to go to sleep?

Whether you’re an avid space explorer or you just want to infuse a little extraterrestrial flair into your baby’s moniker, there are infinite options for baby names that are out of this world.

Hopefully, you’ve found a space-inspired name that’s worthy of the center of your universe.

If you haven’t decided on the perfect name, or if you’re not 100% sure you want a space name for your baby boy, here are some other lists to check out: 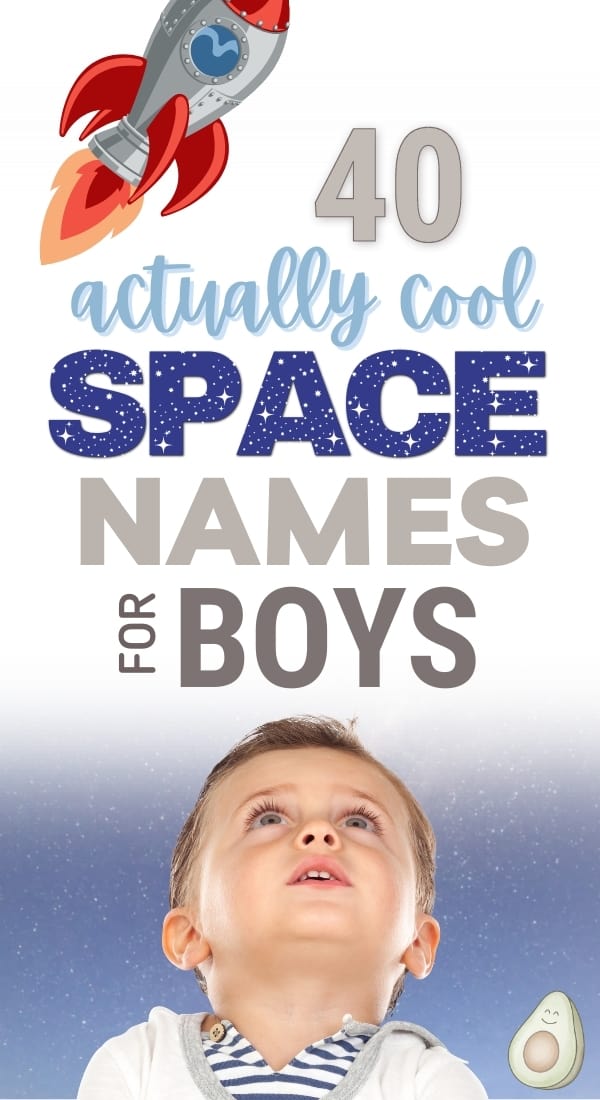 Other places to look for space-related baby names

If this mega list of space names for babies didn’t quite have what you were looking for, there are tons of other places to find ideas.

Fair warning, though: Most of the other celestial names you’ll find will be a bit more “out there.”

Here are some other ways to find space names:

So many celestial objects are named after Greek and Roman gods and goddesses. It’s a gold mine of space names, particularly if you tend to gravitate towards unusual baby names.

Start with some of the most popular ones like Star Wars, Star Trek, Firefly, The Mandalorian, A Space Odyssey, Apollo 13, and so on!

Check out the names of the characters, the locations, the spaceships, and even the aliens!

Sites like IMDB are a great resource for tracking down lesser-known movies and shows with space-related names.

Another great way to find space-related baby names is to look up the names of astronauts and scientists who have made important contributions in the field of space exploration. There are tons of lists online with all the names listed alphabetically.

Some of these words themselves make for cute first or middle names.

Or you can use the names of specific ones like Saturn (obviously a planet), Eros (an asteroid), Cassiopeia (a constellation), or like I joked at the beginning of this article, Andromeda (a galaxy).

Don’t feel limited to English words! Finding a great space-related baby name can be as simple as looking up words like star, space, moon, and planet in a foreign language dictionary. Google works for this too, of course.

As you can see, it’s pretty easy to find space-related baby names. The hardest part might be narrowing down your list!

Space Names for Babies that are Actually Cool